The DUP has taken the most seats and the most votes in the Northern Ireland local elections. With...

The DUP has taken the most seats and the most votes in the Northern Ireland local elections.

With all seats now filled, Sinn Féin has come in as the second biggest party – with a slight drop in its vote.

The Alliance party was the big winner after it gained 21 seats on its last showing in 2014.

Smaller parties such as the Greens and People Before Profit also performed well.

In the end, the DUP secured 122 seats, eight less than it did in 2014. Its overall vote percentage was higher than it was the last time out.

Sinn Féin saw a slight drop in its vote – but it still managed to retain its 105 seats.

The centrist Alliance Party finished on 53, with a jump of 21 seats.

Help us deliver it.

“Sinn Féin made gains in a number of areas across the north, including in areas where Sinn Féin have previously not had any elected representatives,” she said.

"There is an onus on all of the progressive parties to use their mandates in the coming talks to deliver equality, respect and the rights of all and re-establish genuine power-sharing and institutions operating to the highest standards.

“It is the responsibility of political leaders to reflect on these results and commit to resolve the outstanding issues in the coming talks.” 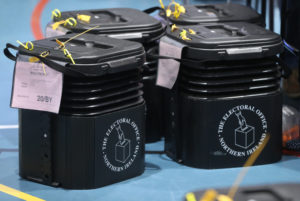 The SDLP finished with 59 seats, polling strongly in places, but dropping slightly in the standings overall.

A total of 462 seats were up for grabs across 11 council areas in the elections.