A so-called 'green list' of countries deemed safe to travel to is now not expected to be publishe...

A so-called 'green list' of countries deemed safe to travel to is now not expected to be published on Monday.

A Cabinet meeting to sign off on the list has been deferred because of the ongoing European Council negotiations in Brussels.

The Cabinet is due to meet on Tuesday as well to sign off on the July stimulus package.

It is not clear yet if the green list will also be released on Tuesday, or put back until later in the week.

Newstalk's political correspondent Sean Defoe told Breakfast Briefing: "The Taoiseach was obviously meant to be back by now from Brussels - that meeting starting on Friday, one of the longest now EU Council summit's in living memory, to go on as they to hammer out the €750bn coronavirus package and also the EU budget for the next seven years.

"So it became clear last night that he wasn't going to be back in the country, certainly early today at least, and it looks as through those meetings are going to go on again into this afternoon.

"It's also potentially even putting tomorrow's Cabinet meeting in danger, depending on how much progress has actually emerged from there overnight.

"That means the green list for travel is not going to be published today.

"The Cabinet has to meet to actually sign off on the final destinations that are going to be on it".

Italy and Greece are likely to be on the list, while the US and the UK will not.

And areas of some resurgence, such as Spain and Portugal, are uncertain.

The summit of EU leaders is running into its fourth day, with slow progress in talks over a budget and pandemic rescue package. 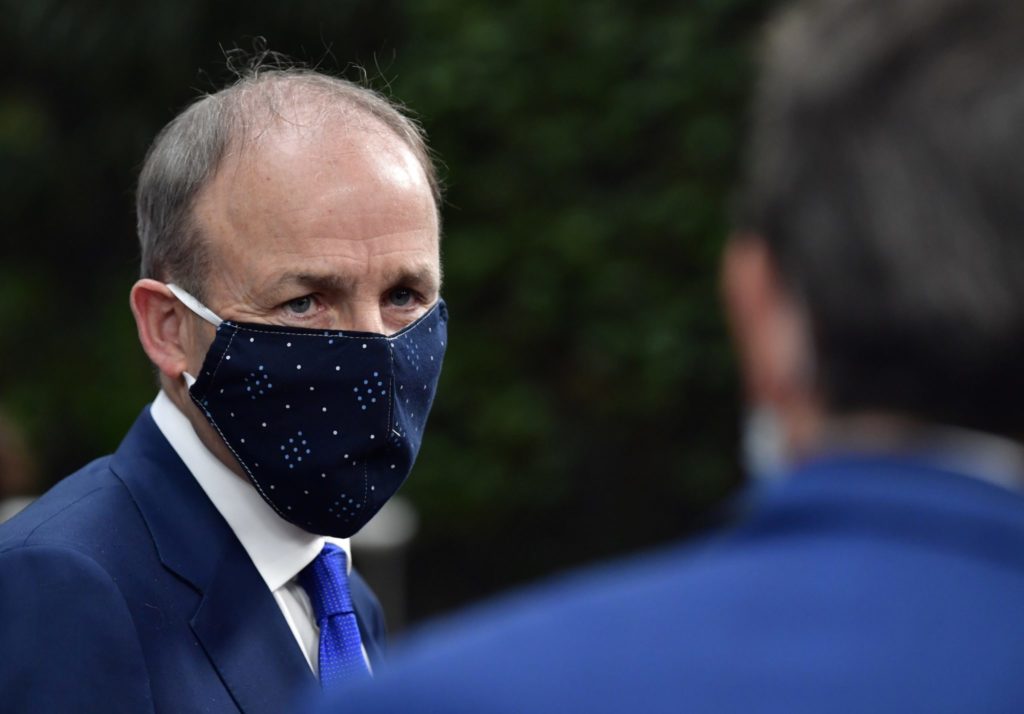 The Taoiseach Micheal Martin arrives for an EU summit at the European Council building in Brussels, Friday, July 17, 2020. Leaders from 27 European Union nations meet face-to-face on Friday for the first time since February, despite the dangers of the coronavirus pandemic, to assess an overall budget and recovery package spread over seven years estimated at some 1.75 trillion to 1.85 trillion euros. (John Thys, Pool Photo via AP)

Leaders have been in negotiations since Friday to decide on the EU's budget for the next seven years and what form a €750bn COVID-19 recovery fund will take.

There is division over whether it should be made up of grants or loans and what conditions are attached.

There was some progress on Sunday.

A new revised plan has replaced €50bn in grant aid with loans, with the headline figure of €750bn unchanged.

Meanwhile Taoiseach Micheál Martin has said Ireland will be a "net contributor" to the fund.

Speaking on Satuday, he said: The Taoiseach said: "We're saying that Europe has to recover because we're an exporting nation, we want a European-wide recovery because that will help to underpin an Ireland-wide recovery.

"That's the kind of stance we're taking as opposed to looking to how much we get back.

"We will be a net contributor at the end of the day out of all of this in any event.

He added that "the big picture" is that Europe "needs to do something dramatic and something impactful" collectively with regard to raising and allocating funds to get an economic recovery going.

Main image: Air travellers stand in a queue in front of a check-in desk at Frankfurt Airport in Germany. Picture by: Arne Dedert/DPA/PA Images