The Government is expected to receive a report today on how COVID-19 vaccines will be rolled out ...

The Government is expected to receive a report today on how COVID-19 vaccines will be rolled out in Ireland once they are approved.

A high-level task force is due to complete its work on the logistics of how doses would be distributed.

The Cabinet has already decided that nursing home residents, frontline healthcare workers and over 70s will be first in line.

The HSE's Chief Clinical Officer Dr Colm Henry said healthcare workers including GPs, nurses and pharmacists will all be involved in vaccination programmes, and there is plenty of experience of large-scale programmes here.

European regulators are due to decide whether to approve the Pfizer jab by December 29th.

He said: "It's important to remind ourselves just how fragile those gains are.

"If we don't maintain a very high level of practice in terms of public health measures as we await the exciting development of a vaccination, which is in many ways around the corner, it would be a real regret if we were to see a surge in infections and a rise in mortality occurring as a result of that for people who might otherwise be vaccinated in a few short weeks or months."

It comes as 15 further COVID-19 related deaths, as well as 310 new cases of the virus, were reported in Ireland yesterday. 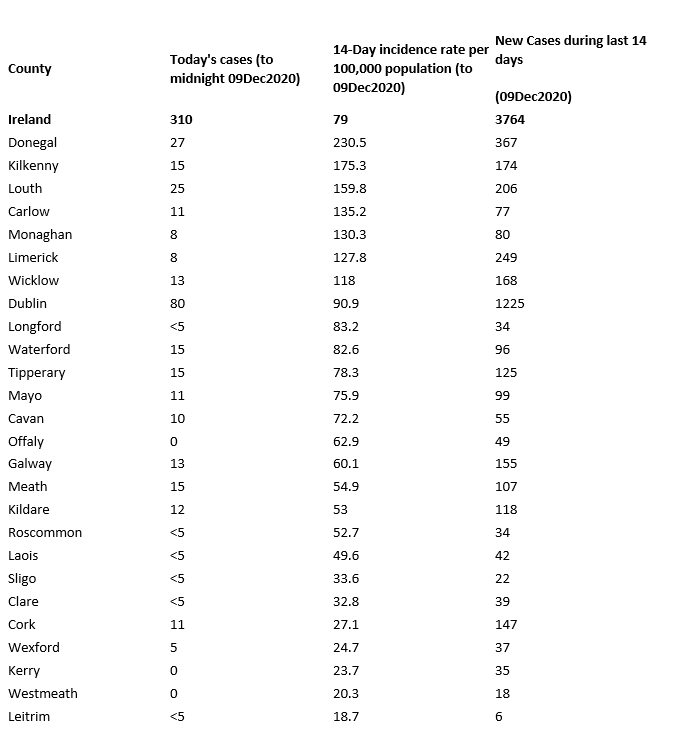 Recent figures have revealed details about the coronavirus hotspots around the country.

The 14-day incidence rate in an area in Donegal is over six times the national average as the county continues to have the highest rate in the Republic.

But in the Carndonagh local electoral area in Co Donegal, it was nearly 519.

Donegal also had the LEA with the country's second-highest incidence rate - that was Letterkenny, at 322, which is four times the national average.

Three other areas in the county also had incidence rates of at least double the national average - Lifford-Stranorlar, Milford and Buncrana.

Elsewhere in the border, some LEAs in Monaghan and Louth also had high incidence rates.

Meanwhile, the Claremorris local electoral area in Co Mayo had a rate of 258 during the two-week period - the third highest in the country.

Main image: A disposable syringe and vaccination doses with the vaccine on a vaccination card. Credit: Frank Hoermann/SVEN SIMON/DPA/PA Images