The publication of a 'green list' of countries deemed safe to travel to could lead to confusion a...

The publication of a 'green list' of countries deemed safe to travel to could lead to confusion and give people "mixed messages", the Chair of the Coronavirus Expert Advisory Group has warned.

Dr Cillian De Gascun said it is important not to "get distracted by the travel side of things" given that the majority of COVID-19 cases are acquired on the island of Ireland.

Speaking on Newstalk's On The Record with Gavan Reilly, Dr De Gascun said that while he could "see the logic" of having a travel list, we "still have no idea what individuals from those countries have the infection".

He said: "As an island, we've been in a position to stem the transmission of the virus very effectively to a very low level.

"The problem is we've very open borders and people coming from countries haven't the same control of the virus, from a NPHET perspective we believe that's a significant risk.

"From a NPHET perspective and from a public health perspective, we really don't want people to travel this year.

He conceded that there would be confusion for people who could be given "mixed messages" if the public health advice is to not travel overseas this summer while at the same time, the government is publishing a 'green list'.

Dr De Gascun said: "There is a risk that [having a 'green list'] could lead to some confusion and leave people with mixed messages and we're hearing that now from some members of the general public.

"It would be nicer and clearer if there was just a straightforward message that people could just buy into."

He said a stronger mechanism should be in place to ensure people quarantine for 14 days after coming from abroad, and the most efficient way of doing this would be to have a designated facility.

Speaking on Newstalk Breakfast today, Professor Sam McConkey also urged the government not to "repeat the mistakes" of February and March when guidelines on the easing of travel restrictions are published tomorrow. 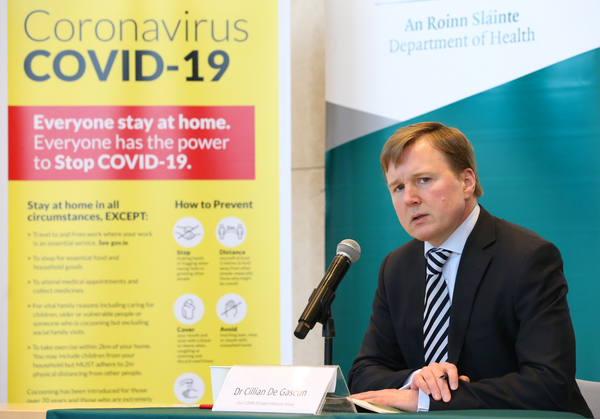 With regard to the R number, which is now between 1.2 and 1.8, Dr De Gascun, it can be difficult to get an accurate reflection of where it stands given the low number of cases.

However, he said the concern is that "once it goes above one, we know the epidemic is growing again".

The priority "has always been to get the R0 below one purely because then we know the epidemic is shrinking".

He said: "Most of the cases we have identified recently have been tracked to those single events or a number of different clusters and that's an important factor.

"We don't believe that given the case numbers recently, that there is necessarily huge widespread transmission in the community.

"So while there's an element of concern, we don't want people to lose hope at this stage that we're moving into a second wave or a resurgence because it's too early to say that.

"[The] message we want to get out to people is that the control of this epidemic is very much in our hands and we've brought it under control before as a society and we can do that again."