Game of Thrones has boosted the Northern Irish economy by hundreds of millions. Tourists have flo...

Game of Thrones has boosted the Northern Irish economy by hundreds of millions.

Tourists have flocked to this island to visit the locations where the cult HBO series has been shot – from the ‘Haunted Forest’ at Tollymore Park in Co Down, to the ‘Dark Hedges’ at Armoy, Co Antrim.

Northern Ireland Screen, the Government body that promotes the film and tv industry in Northern Ireland, estimates the filming process alone has pumped £250m into the economy. That comes from spending on cast, crew, facilities, hotels and more. That figure doesn’t include the boost from tourism, which is also likely to run into hundreds of millions.

Last year alone the series drew 100,000 visitors to Northern Ireland, injecting £30m into the economy, according to estimates from Tourism Ireland.

And the boost hasn’t only been to the economy north of the border. Much of the air access to this island comes via the South, meaning the Southern Irish economy is well placed to benefit from passing “Game of Thrones” traffic.

Behind the headline numbers and the big picture are the individual businesses who have benefited from the series. Sharon Schindler, owner of Shola Coachhouse b&b in Portrush, is coming into her 7th year in the b&b industry.

“At the beginning there was very little talk about Game of Thrones but now it is absolutely massive. We have guests coming on Game of Thrones honeymoons where they’re going to all the locations. It’s even getting stronger now with this final series,” she told Newstalk. 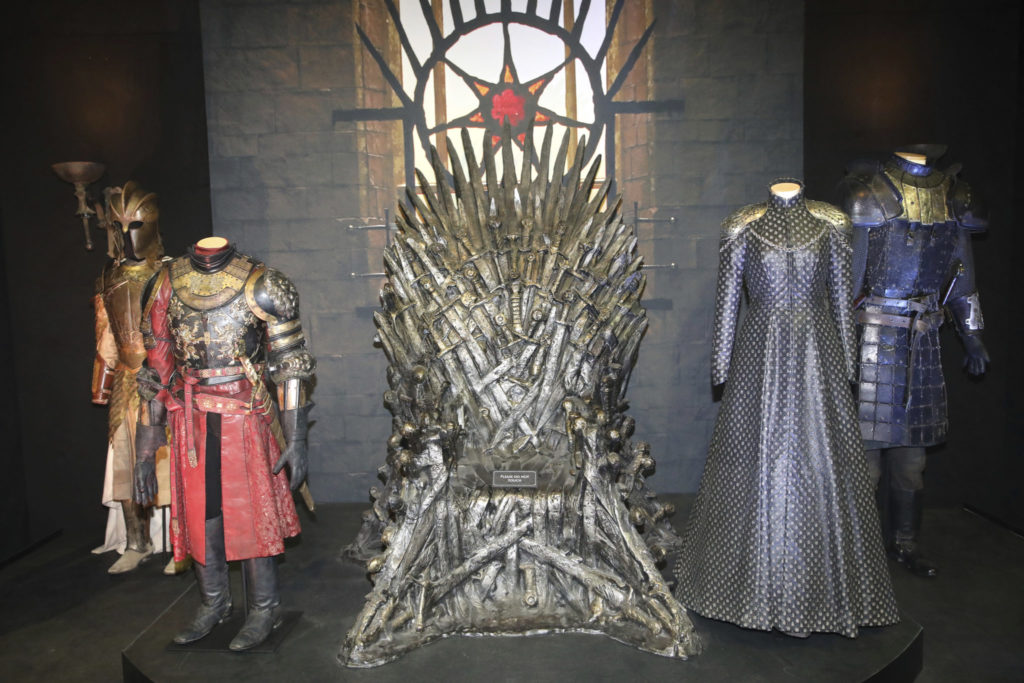 The Iron Throne and costumes on display during the launch of The Game of Thrones Touring Exhibition at the Titanic Exhibition centre in Belfast, Northern Ireland, Wednesday, April 10, 2019. The exhibition is made up of authentic costumes, props and settings from seven seasons. (AP Photo)

It’s not just hospitality businesses who have benefited either – Chris Suitor from Suitor Brothers’ Tailoring in Belfast has had a boost from the business too, dressing many of the actors and production crew along the way.

“It’s been absolutely wonderful for us, and that’s just my little business.

"The effect it’s had on the city as a wider entity is just incalculable."

"I sit on a couple of different boards in the city and the economic benefit is something we could barely put a number on, we’re into the hundreds of millions,” he said.

After Game of Thrones

Now that the filming is over though, the challenge is whether the economic boost can be maintained. Memories fade and once Game of Thrones is no longer on air, the number of fans coming to Ireland may dwindle.

Tourism Ireland is trying to make sure that doesn’t happen. It has a close relationship with HBO – even getting plot lines in advance so it can capitalise on the series as soon as an episode goes to air.

“There’s a cult element to the series that will live on long after it’s finished,” Tourism Ireland chief executive Niall Gibbons said, adding that a permanent ‘Harry Potter World’ equivalent is being planned for Banbridge, Co Down.

For the film industry, Game of Thrones will be a key part of future sales pitches, said Northern Ireland screen chief Richard Williams.

“It’s a bit of a cliché but it’s put us on the map…before Game of Thrones was produced in Northern Ireland, we wouldn’t have been known by many of those [film and tv makers].

“After Game of Thrones, there’s nobody that’s serious in the screen industry that doesn’t know that Northern Ireland is a hub for content.

I don’t think we can replace Game of Thrones like-for-like but for 10 years the most challenging, the biggest and the most successful drama show in the world was made in Belfast. If we can’t sell the supply companies and the crew and the infrastructure that made that, well then we won’t be able to sell anything”.

Michael O'Leary: Countries will stop 'locking people down' from June