Inter Milan striker Romelu Lukaku has spoken out about his time with Manchester United, and descr...

Inter Milan striker Romelu Lukaku has spoken out about his time with Manchester United, and described himself as a scapegoat when he was at Old Trafford.

Speaking to the LightHarted Podcast with Josh Hart, an NBA star for the New Orleans Pelicans, Lukaku vented his frustration at rumours surrounding a potential exit from United. The podcast was recorded before he left Old Trafford.

"A lot of stuff has been said where I didn't feel protected. I felt like a lot of rumours, 'Rom going there', 'they don't want Rom', and nobody came out to shut it down."

"It was for a good three, four weeks. I'm waiting for someone to come out and shut it down. It didn't happen.

"I had my conversation, told them it was better to go our separate ways. If you don't want to protect somebody, all these rumours come out. I just wanted you to say 'Rom is going to fight for his place', but it never happened for four, five months.

"It was all, 'he's got to go, he doesn't deserve to be there'. Well OK, then I want to go now. There is fighting for your position, but also being somewhere that people want you to be.

Check out @romelulukaku9 on the most recent episode of @lighthartedpod! He speaks about what went down at Man U, why he’s so deadly on Belgium, and his excitement for Inter!

The Belgian international also spoke out about leaks to the media during the latter stages of his stay in Manchester.

"If you're happy, you find a way, it doesn't matter if you're on the bench or starting. But nobody told me that was the situation, so I thought for two, three weeks to analyse, see all this **** coming out in the media. Who leaks it? Not me. Not my agent. I see it on my phone come out of nowhere.

"I told them it's not good for me to be at a place where I'm not wanted. We're not stupid. They consider us dumb, but we are not dumb, we know who is doing leaks and stuff. I told them, you can't be working like this, it's better for me to go now."

The Inter forward has netted 48 times in 81 appearances for his country, and he said he felt he and two of his United teammates were the constant scapegoats when things didn't go right for Ole Gunnar Solskjaer's side. 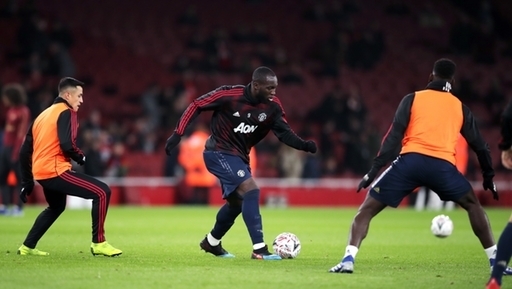 Manchester United's Romelu Lukaku (centre) and Alexis Sanchez (left) warm up before the FA Cup, Fourth Round match at the Emirates Stadium, London.

"They have to find somebody. It is Pogba, it is me or it is Alexis. It’s the three of us all the time.

“They have got to find somebody to blame. I put my hand up, like, this year I don’t think I was the only one playing bad. A lot of people were playing bad but they had to find the culprit.

“I think the team has so much potential to do some great stuff. There is a lot of talent. But it is not only talent; you really have to build a team.”

Lukaku scored 42 goals in 96 matches at United, having joined from Everton for £75m in July 2017. Inter paid £73m for his services in the recent transfer window.

He didn't feature once for United during their pre-season tour of Australia and opted to train with Anderlecht to maintain his fitness as his future hung in the balance.