Arsenal manager Unai Emery says he is fighting to "convince" captain Laurent Koscielny to stay at...

Arsenal manager Unai Emery says he is fighting to "convince" captain Laurent Koscielny to stay at the club.

The 33-year-old is looking to leave London with a year remaining on his contract at the Emirates. He didn't travel with the team on their pre-season tour of the United States.

Speaking at a press conference, Emery said, "now it is between the club and him. I fight to convince him, but I respect his decision, a very personal decision, and that situation can only manage with one argument.

"I haven't lost my hope that he will be with us next year. But at the moment his decision is to leave and we are also thinking if we can improve with other players and how we can help with him.

"With respect, it's better for us, it's better for the team, and it's changing our idea with the centre-back because if he is here with us this season, it's very different than if he isn't with us.

"At the moment it's a very personal decision, and we are respecting that. I am speaking with him and we are going to find the best solution, but overall we need a player like him." 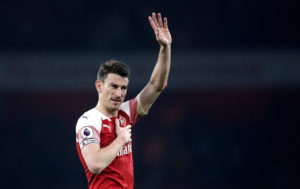 Lille winger Nicolas Pépé is believed to be close to signing for Arsenal for around €80 million (£72 million). The deal would be a record signing for the Gunners, the highest since they bought Pierre Emerick Aubameyang from Borussia Dortmund in January 2018 for around €60 million (£55 million).

Speaking about the potential for the transfer going through, Unai Emery said, "This one at the moment is not closed, but he is one we are following.

"We are working on the possibilities to sign players. We signed Ceballos, and we have a possibility with Pepe.

"We are speaking about a lot of players, we want to select on players who can really help us, give us big performances and improve our squad. We have different options."