The FAI have confirmed they will stage a four-team tournament at a neutral venue this summer.  D...

The FAI have confirmed they will stage a four-team tournament at a neutral venue this summer.

Dundalk, Shamrock Rovers, Bohemians and Derry City will be allowed to train initially, with the mini-tournament to follow in July or August.

The venue has not been confirmed, but it is believed to be the Aviva Stadium.

All four are due to be in European action this summer.

Peamount United will also be allowed to resume training early, but a decision on when will not be made until the qualifying dates for the Women's Champions League are known.

Players and staff of each club will be regularly tested for COVID-19 from May 26 before a resumption of group training on June 8.

All other SSE Airtricity League squads can return to collective training on June 29 as was expected under Phase Three of the government's roadmap, and they will also undergo regular testing.

However, the FAI have extended the suspension of all football under its jurisdiction until July 20th.

They've also advised clubs not to facilitate any organised training, including in groups of up to four, under Phase One of the Government’s Roadmap For Reopening Society and Business. 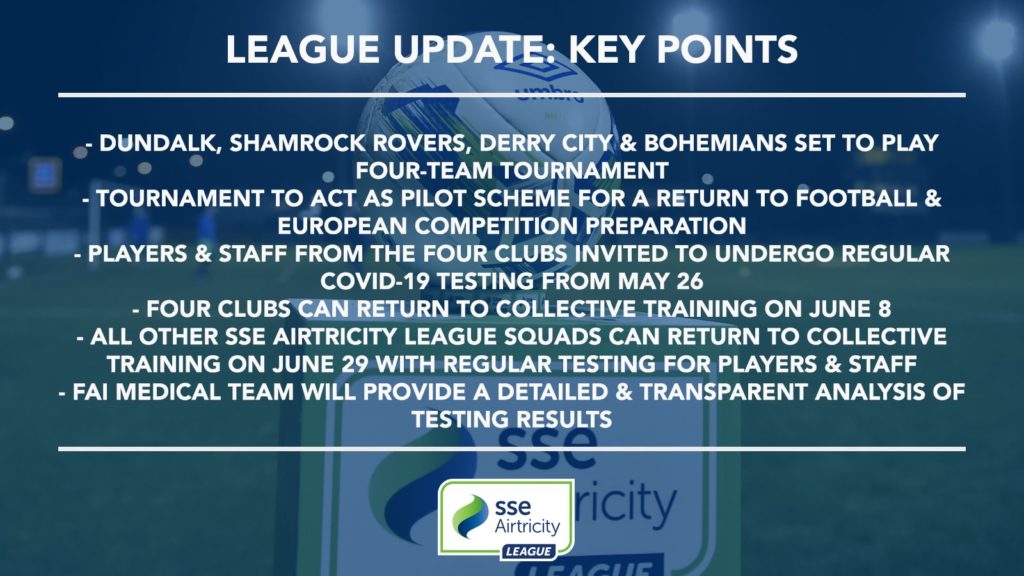 Phase One begins on Monday (May 18) and is to allow outdoor gatherings of four people as long as social distancing is maintained.

FAI doctor Alan Byrne has been appointed by Sport Ireland to the Medical Advisory Group, and he's asked clubs: "not to open their grounds and pitches, even to groups of four, and not to consider collective training or playing football until the medical evidence suggests otherwise."

All amateur adult and underage clubs can resume group training on August 10, with a return to play pencilled in for August 28.

Dr. Byrne added, "Decisive actions by our clubs now, will improve the chances of a safer return to football for everyone.

"We must take small and deliberate steps before we can allow all football to return.

"My recommendation to the FAI is to begin with a pilot programme on June 8th for the four SSE Airtricity League teams who have qualified for European football.

"This will allow us to analyse every step of their journey back to football, beginning with a safe return to training.

"The information we will gather from that pilot programme will be invaluable for all players, at all levels of the game, as we look to establish a safer pathway to a return for all football, one that can be approved by all Government agencies and UEFA.

"We all want football back in our lives but it is not worth risking one life by rushing to get our game back."