There were a number of Irish, including Brighton's Aaron Connolly, involved in the EFL Cup second...

There were a number of Irish, including Brighton's Aaron Connolly, involved in the EFL Cup second round fixtures cross-channel last night, as Mick McCarthy gets set to trim down his senior international squad.

The Republic of Ireland will take on Switzerland in a crucial Euro 2020 qualifier on Thursday week September 5th at the Aviva Stadium. That will be followed by an international friendly against Bulgaria on the following Tuesday, September 10th.

Both games will be held at Dublin's Aviva Stadium.

Galway teenager Connolly got off the mark with a 55th-minute opener as Graham Potter's side saw off Bristol Rovers 2-1 away from home.

Left-sided attacker Connolly was also awarded Man of the Match on his first competitive senior start for the club, after impressing with their Under-23 side last season.

Michael Obafemi got off the mark for the season by scoring the only goal of Southampton’s away day with Fulham at Craven Cottage.

The 19-year-old converted a close-range winner in the 57th minute but did have to leave the field of play with an injury shortly afterward.

Shane Long did get some game time in that second half for the Saints.

Another Under-21 international was in action at Crawley Town - Norwich City's 18-year-old Cork attacker Adam Idah started in a 1-0 win for the visiting Premier League outfit.

There were other goals for the Irish too aside from those via Connolly and Obafemi. Conor Hourihane was restored to the Aston Villa line-up for their 6-1 away win over Crewe Alexandra, scoring a brace of goals.

Jack Grealish netted the last of those goals for Dean Smith's Midlands team. 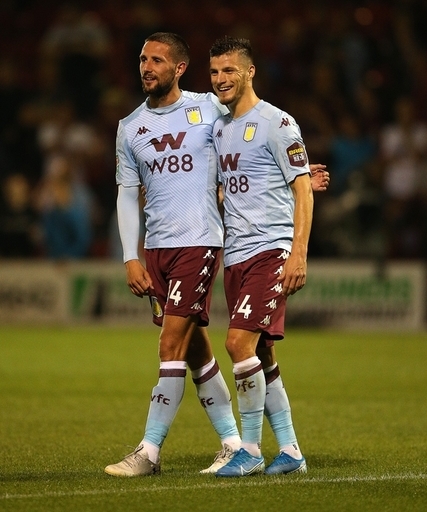 Aston Villa's Conor Hourihane and Frederic Guilbert after the final whistle during the Carabao Cup Second Round match at Alexandra Stadium, Crewe.

The 19-year-old has been capped for the Republic at Under-17, Under-19, and Under-21 level, and qualifies via his Irish mother. He came off the bench as his West Ham beat Newport County 2-0. at Rodney Parade.

Jack Wilshere and Pablo Fornals scored the goals for the Hammers, with Carlow's Pádraig Amond in action for Newport.

Waterford man Jayson Molumby is currently on loan from Brighton at Millwall and was involved as they drew 2-2 with Oxford United last night before bowing out on penalties.

One Irishman had more luck in a shoot-out though - full international Alan Browne put away the winning kick for Preston in their 5-4 shoot-out win over Hull City. That game had ended 2-2 after extra time.

Also involved last night was Josh Barrett, who picked up a brace for Reading in their away fixture at Plymouth Argyle.

Barrett's parents are from Dublin and Tipperary, and he has picked up three Under-21 international caps so far. He represented Hampshire in GAA when he was younger.

Burnley host Sunderland in the EFL Cup tonight at Turf Moor, with Mick McCarthy expected to be in attendance.

Robbie Brady is facing a race to be fit for the international next week. Jeff Hendrick made his seasonal bow off the bench in the Claret's 1-1 draw with Wolves at the weekend.

In another major boost for McCarthy last night, James McCarthy completed his first 90 minutes for Crystal Palace. Roy Hodgson's side did, however, exit the tournament at the hands of Colchester United on penalties.