Varadkar tells Pence: Brexit is not a problem of our making

The Taoiseach Leo Varadkar has told US Vice-President Mike Pence that Brexit is not an Irish prob...

Varadkar tells Pence: Brexit is not a problem of our making

The Taoiseach Leo Varadkar has told US Vice-President Mike Pence that Brexit is not an Irish problem.

Mr Pence and his wife Karen joined Mr Varadkar and his partner Matthew Barrett for lunch at Farmleigh House in Dublin earlier.

The US Vice-President also met with President Michael D Higgins and Tánaiste Simon Coveney as part of his trip to Ireland. 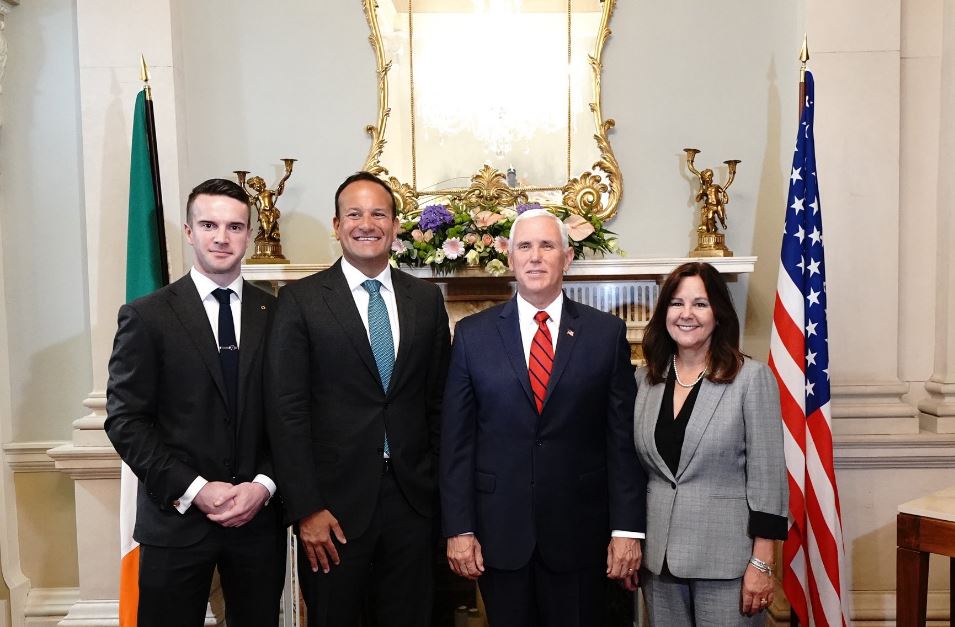 From left to right: Partner of Taoiseach Leo Varadkar Matt Barrett, Leo Varadkar, US Vice-President Mike Pence and his wife Karen | Image via @VP on Twitter

Speaking after a bilateral meeting on Tuesday, Mr Varadkar said: "The vice-president and I have come from a marvellous meeting where we discussed deepening US-Ireland bilateral relationship.

"We also discussed how the United States helped make peace possible on this island, and the vital role it has played protecting the Good Friday Agreement for 20 years and indeed, before that, the role President Reagan played in encouraging Mrs Thatcher to sign the Anglo-Irish Agreement.

"Mr Vice-President, your visit to Ireland comes at a critical time in our history, with Brexit less than two months away. 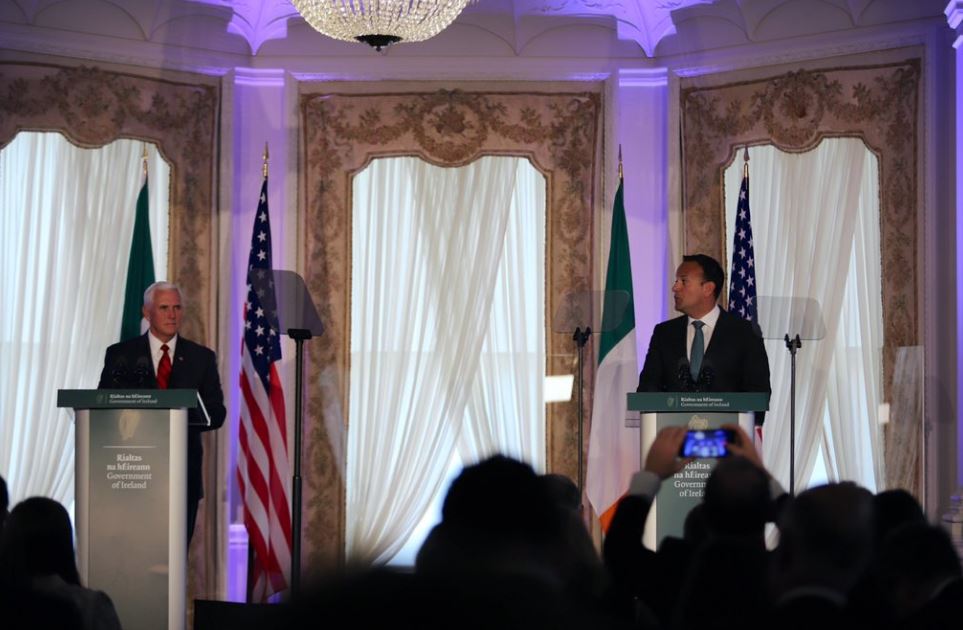 "In so many ways, the UK and Ireland are deeply intertwined.

"The UK's decision to travel a different course to ours risks being deeply disruptive, especially for the people of Northern Ireland, where most people voted to stay in Europe.

"Divergence between the UK and the EU means that the return of a hard border on this island is a very real risk."

"That is why we must stand our ground on the Withdrawal Agreement. An agreement which was carefully negotiated to overcome all these risks. 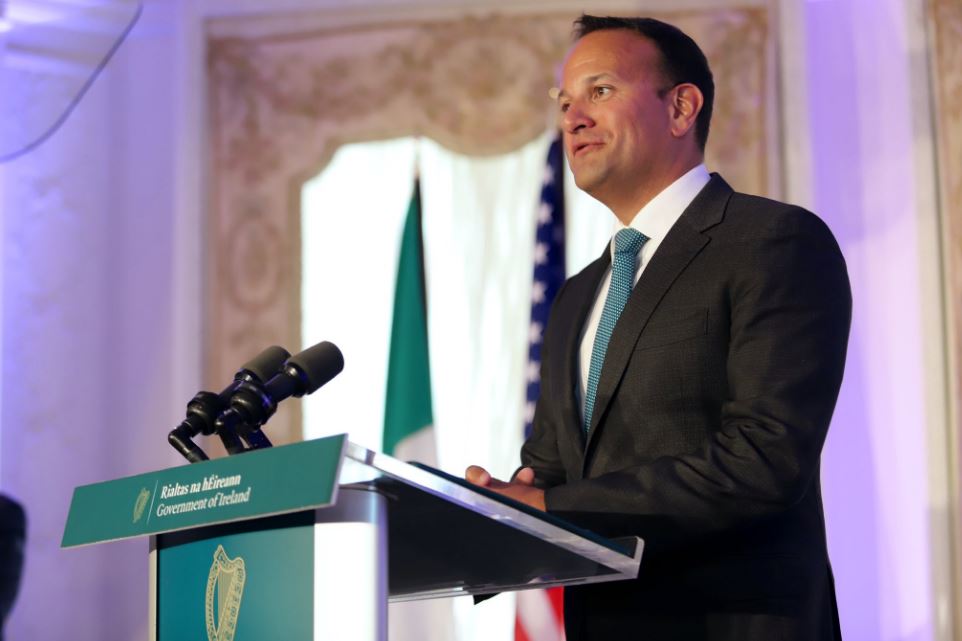 "And so Mr Vice President I ask, that you bring that message back to Washington with you.

"This is not a problem of our making. It is one we want to solve - through an orderly Brexit and a withdrawal agreement that guarantees no re-emergence of a hard border on this island."

Following their meeting, President Michael D Higgins said it reflected on the "deep bonds and enduring relations of friendship, culture and trade between Ireland and the United States"

President Higgins acknowledged long-standing US support for the peace process in Northern Ireland, and highlighted the importance of human rights and equality legislation in resolving the conflict and promoting social change on the island of Ireland.

President Higgins also spoke of shared concerns about the challenges posed by Brexit - and stressed the important role of multilateral cooperation in addressing complex global issues such as conflict, poverty, food insecurity and climate change.

It comes amid a protest outside the Dáil, which was organised by Amnesty Ireland, to highlight love and acceptance.

Mr Pence has come under fire in the past for his views around the LGBT community and same-sex marriage.

The White House claimed that his meeting with the Mr Varadkar his partner showed he is not "anti-gay".

"Ireland has made some great steps in the right direction over the last number of years as a very progressive and inclusive democracy," she said. 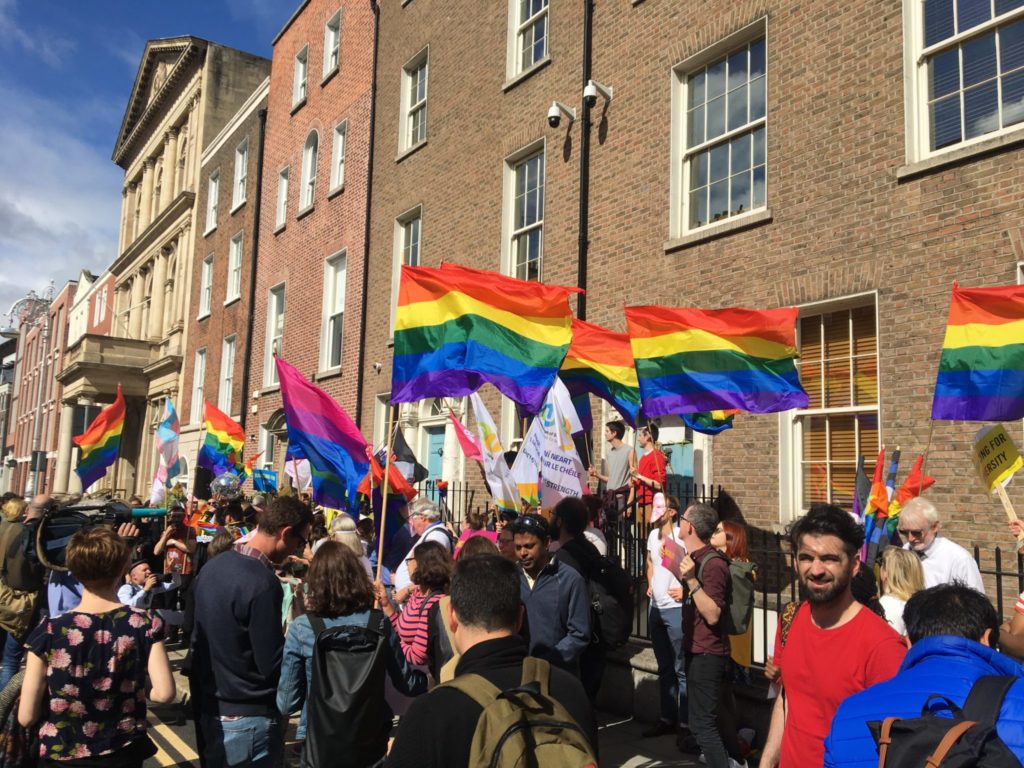 "That is the message we want to send to Vice President Pence - this is what Ireland is today and if he truly wants to embrace his Irish roots, that is part of it."