Four out of five workers experiencing sexual harassment at work do not report the incident to the...

Four out of five workers experiencing sexual harassment at work do not report the incident to their employer, according to a new survey from the Irish Congress of Trade Unions (ICTU).

It comes as Monday marks International Day to End Violence Against Women.

ICTU surveyed more than 1,300 union members with experience of sexual harassment and sexual assault in the workplace.

Sexual harassment is defined as any form of unwanted verbal, non-verbal or physical conduct of a sexual nature which has the purpose or effect of violating a person's dignity and creating an intimidating, hostile, degrading, humiliating or offensive environment for the person.

Some 81% of respondents did not report the unwanted sexual behaviour to their employer - while only one in four of the minority who did report such incidents felt it was taken seriously and dealt with satisfactorily.

More than half (54%) of respondents have been subject to unwelcome jokes of a sexual nature, while two in five (41%) reported receiving unwelcome verbal sexual advances in the workplace.

More than one-third have been subject to unwelcome comments of a sexual nature about their body or clothes, and a similar number have experienced unwanted touching - such as a hand on the knee or lower back.

While 34% have been asked unwelcome questions or comments about their sex life. 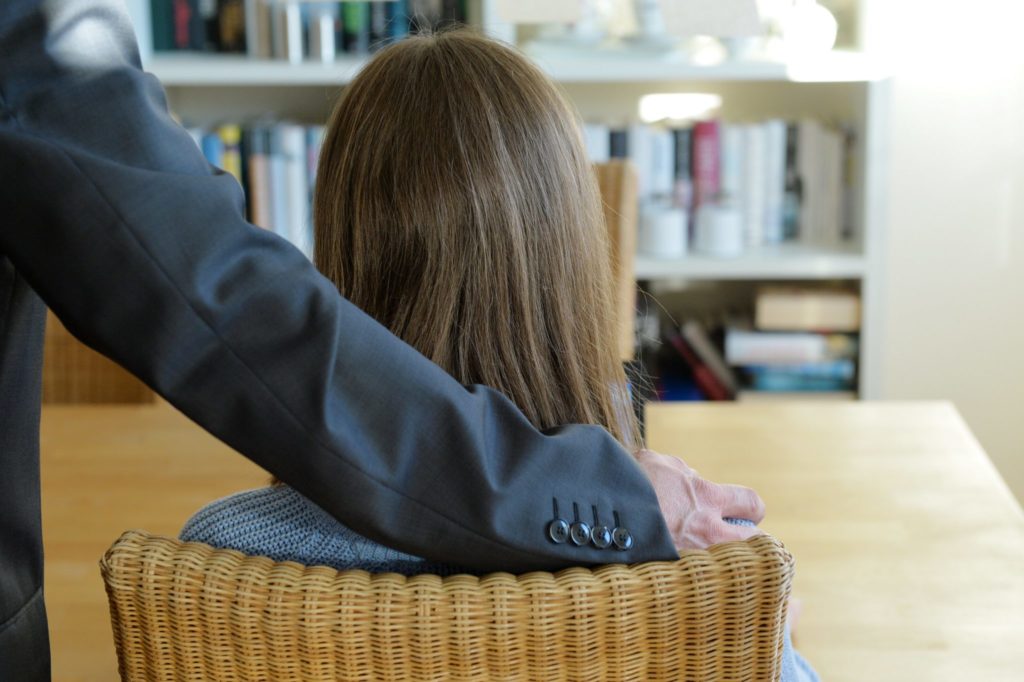 A man harasses a woman at her workplace in Germany | Image: Frank May/DPA/PA Images

Commenting on the survey, ICTU General-Secretary Patricia King said: "Sexual harassment can happen to anyone, anywhere, at any time. Yet all too often, it happens in the workplace.

"Of all the alarming statistics thrown up by the polling, the fact that jumps out for me is the unacceptably high levels of under-reporting and dissatisfaction with their employer's action among those who do report sexual harassment", she added.

The national opinion poll of 1,347 union members with experience of sexual harassment at work was conducted online between November 1st and 14th.

The survey focused exclusively on people's experience of sexual harassment in the workplace, rather than measuring the scale of the problem.

"We wanted a deeper understanding of workers' experience of sexual harassment at work - the types of incidents experienced, the perpetrators and location, the barriers to reporting, and the impact sexual harassment has on the lives of those affected", said ICTU's social policy officer, Dr Laura Bambrick.

"For instance, the Christmas party has long been identified as the most common off-site location of workplace sexual harassment, and this is borne out in our survey.

"However, the extent of unwanted sexual behaviour from colleagues taking place online also reported, points to a growing problem in the modern workplace" she said.

"While the #MeToo movement has shed light on the hidden problem of sexual harassment and sexual assault at work and empowered women to speak out, the fear of a negative impact on their career or of not being believed or taken seriously were the most common reported reasons for not pursing a complaint".

Right to disconnect: Workers under rising pressure to answer out of hours

Over half of workers say workplace friendships are good for productivity