While the number of days lost to sick leave per full-time equivalents has dropped from 9.5 days to 9.2 days.

The Irish Prison Service saw the highest number of working days lost, at 15.2.

This was followed by the Ombudsman for Children's Office, at 14.3 days, and the Department of Social Protection on 12.7 says

Those with the least number of working days lost were the Office of the Secretary to the President, at just 2.8 days, and the National Council for Curriculum and Assessment at 3.5 days.

Overall, the civil service average of days lost was 10. 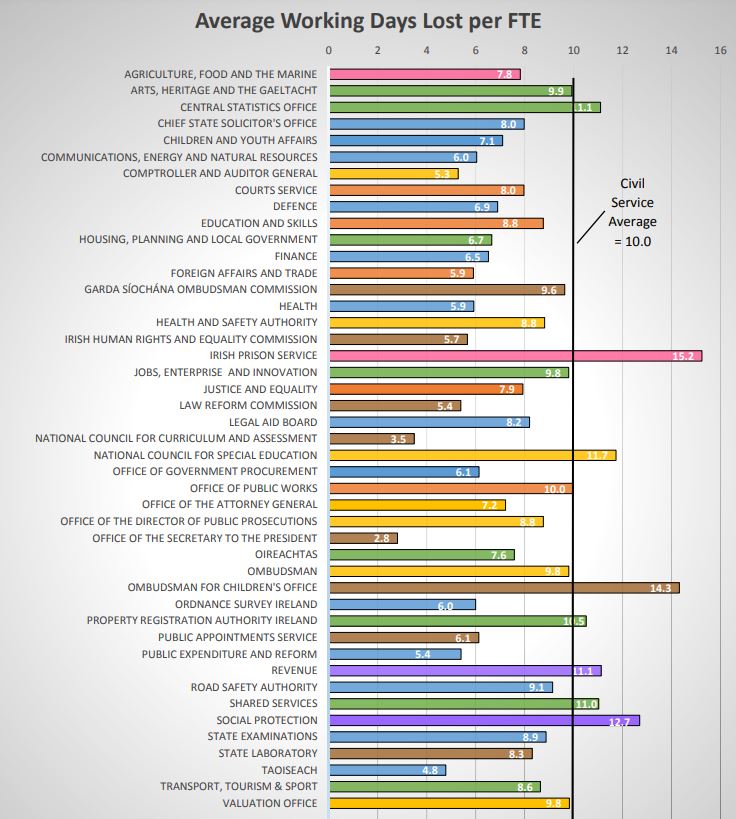 Finance Minister Paschal Donohoe says: "Overall savings in the cost of sick leave across the public service continue to be made, however, further work needs to be done to reduce the impact of the sick leave scheme on the Exchequer.

"The rate of sick leave in the public service remains relatively stable.

"The rising associated salary costs of sick leave as a result of pay restoration initiatives and a growing public sector workforce have seen a substantial overall rise in sick leave costs for the majority of the public sector in 2018."

He adds his department is continuing to collaborate closely with sectoral management and staff representatives from across the public service, to work towards improving the effectiveness of the scheme.

While management in each sector is being told to focus on the management of absenteeism, and policies designed to assist employers in managing cases of prolonged or frequent absence proactively.

The Paid Sick Leave scheme provides for a maximum of 92 days on full pay in a rolling one year period, followed by a maximum of 91 days on half pay.

This is subject to a maximum of 183 days paid sick leave in a rolling four year period.

The judiciary, members of the Defence Forces and staff of the Central Bank are not included in the scheme.