A celebrity chef has warned that some restaurant owners "could get a surprise" when they try to g...

A celebrity chef has warned that some restaurant owners "could get a surprise" when they try to get cooks back to into their kitchens when indoor dining resumes.

Gary O'Hanlon, Executive Chef at Chateau du Coudreceau in France, says a shortage of chefs has been "a massive problem" for a decade.

Cabinet will meet on Tuesday to consider the reopening of indoor hospitality this month, with the EU Digital COVID Certificate expected to be adapted and used as proof of vaccination or recent infection.

The government has indicated a July 26th return "at the latest", and says legislation will be needed to allow it to happen.

Tánaiste Leo Varadkar said yesterday that no firm reopening date has been decided - but it will come soon.

"The industry is saying they're keen to reopen as soon as possible - but we have to get the legislation done. The President has to have time to read and sign the bill."

Hospitality industry stakeholders have already indicated the shortage of staff available to work in pubs in restaurants.

Speaking to The Hard Shoulder yesterday, Mr O'Hanlon said the deficit of chefs to work in these businesses is just as big a problem.

"It has been a massive problem for the last ten years, even a wee bit more but it is certainly something that has gone to new levels since lockdown," he said.

"There's a massive amount of chefs who have had a little taste for life, is one thing.

"Obviously hotels getting the jump on restaurants is going to be another factor for restaurants when they reopen.

"Then there's one that might surprise a lot of people but from talking to lots of friends of mine from around the world, a lot of people with loyalty to places who have been there for maybe ten years, big companies, being forgotten about by owners has certainly put a bad feeling amongst a lot of my friends.

"A lot of others could be in for some surprises when they go to make phone calls for reopening as well so I think there's going to be a major panic once people realise just how short-staffed they're going to be.

"Customer expectation is gone right back up to pre-pandemic levels and people are going to want standards and high end again, that means labour but the labour isn't there." 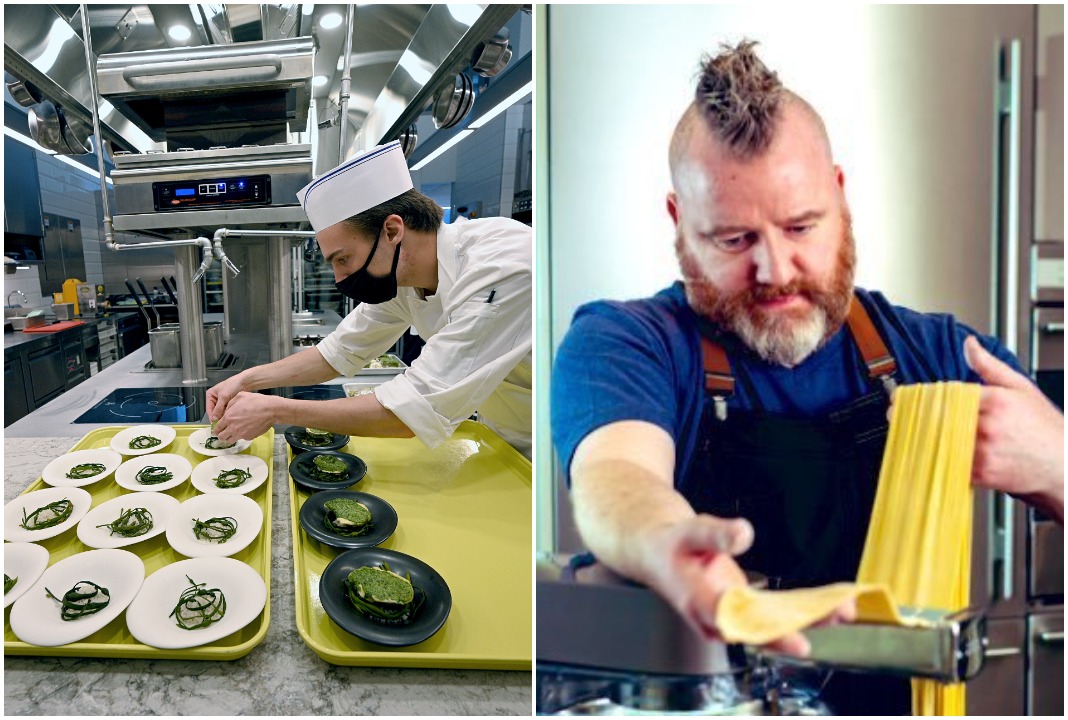 Composite photo showing a chef at work in a restaurant, and Gary O'Hanlon. Credit: PA; Twitter

Speaking on the same programme, David Fitzpatrick of Botown Galway said the issue of chef shortages is "absolutely" something he has experienced.

"We're based on Dominick Street on Galway's west end and there's a host of other restaurants and bars down there and it seems everybody is experiencing exactly the same thing," he said.

"Every single one of our industry colleagues that I've spoken to are all saying exactly the same.

"People who have long-term staff, staff who have been with them for five or six years, their priorities have changed and that's partly down to the pandemic.

Mr Fitzpatrick believes there are several different factors at play in the issue of chef availability.

"A lot of chefs seem to be leaving the industry, they're going out and leaving the hospitality industry, moving out to a 9-5 job where there's less stress, less pressure," he added.

"You can see in the industry, it's hard graft, the hours are long, it's fast-paced, it's high pressure, they're unsociable hours.

"I think while people have had a lot of time off during lockdown, they've reevaluated their lives and what's a priory for them.

"The problem for us is so many chefs have left the industry to pursue other careers.

"A huge disincentive as well is that so many of these staff have been on PUP payments over the last 12 to 18 months and now trying to bring them into the workplace and taking them off PUP, that can be difficult."