A record number of people are in homeless accommodation in Ireland.

Figures from the Department of Housing show 10,568 people were in homelessness as of July.

These are the highest numbers recorded since October 2019, when the figure stood at 10,514.

The south-west region was the next highest, at 585, followed by the mid-east area at 410.

However, the Government figures do not include anyone living in so-called 'hidden homelessness' such as rough sleepers, women in refuge centres or those in Direct Provision. 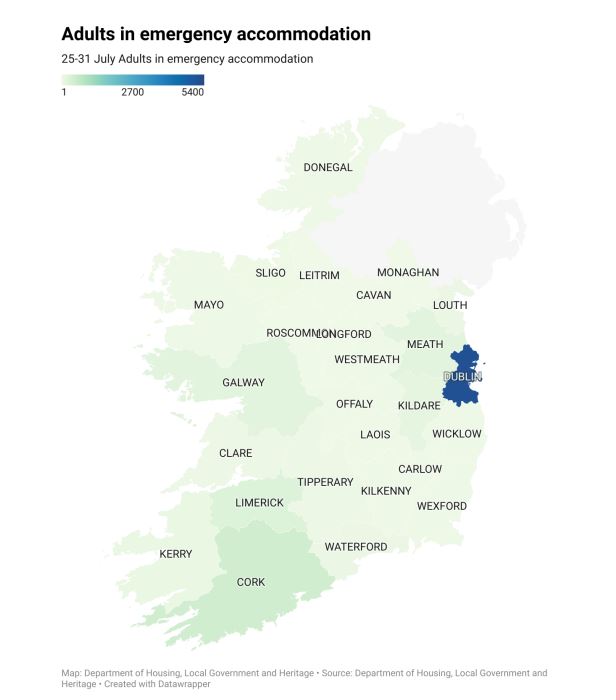 "We all remember that we had record highs before back in 2019 yet we managed then to achieve a 20% reduction in the number.

"We now need to repeat this and go further again by redoubling our efforts and introducing measures that will allow the numbers to fall."

The charity is also calling for a re-introduction of a moratorium on evictions.

"There is a longstanding French model of banning evictions in autumn and winter and this needs to be considered here as it can help stem the flow of people into homelessness", Mr Doyle said.

"It will also allow the thousands of social housing units under construction to come to fruition and allow some of these to be used to help people exit homelessness."

Wayne Stanley is head of policy at the Simon Communities.

He said this is even more significant, given the current housing shortage.

"The previous peak of homeless numbers was seen in October 2019.

"At that time, 3,500 properties were available to rent according to Daft.ie’s Rental Report, compared to just 716 available now.

"Those few properties are completely unaffordable.

"We are seeing landlords leaving the private rental market and the cost of living crisis continues to bite."

He added that the State should take "emergency action" to increase housing supply.

"It is deeply disheartening and concerning to see a record high number of 10,568 people stuck in emergency homeless accommodation while over 166,000 homes are vacant throughout the country.

"Our pre-budget submission calls on the Government to bring 5,000 vacant homes into use in 2023 through a renewed Repair and Lease Scheme to house people in homelessness and those waiting on social housing," Mr Stanley said.

Main image: Tents are seen just meters away from Government offices in Dublin city in May 2021. Picture by: Sam Boal / RollingNews.ie

Over 1,500 social housing offers refused across the country last year