Police and protesters across the US have clashed again on the fifth day of unrest following the death of unarmed black man George Floyd in Minneapolis.

Demonstrations have spread to more than 30 cities, with cars and buildings burned, shops looted and at least two people dead.

Curfews have been ordered in more than two dozen cities to try and stem the violence, while the National Guard have also been deployed across several states.

An 8pm curfew has been introduced in Minneapolis, and the New York Times reports that police used tear gas and projectiles overnight in a bid to disperse protesters.

Meanwhile, videos and images from across the country showed tense scenes as police and protesters faced off.

New York Mayor Bill de Blasio said an investigation was underway after a video shared on social media appeared to show an NYPD vehicle driving into a crowd.

He said the video was 'upsetting', but also suggested officers may have had no choice due to demonstrators converging on the vehicle.

There were also protests outside the White House in Washington DC. 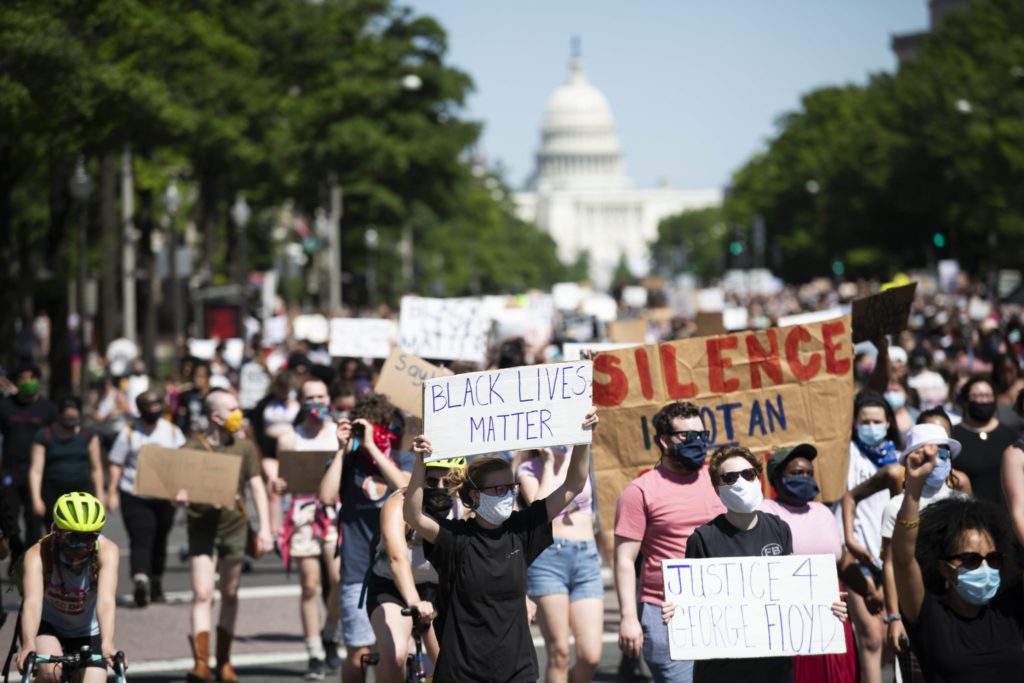 Main image: - Protesters rally towards the White House during a protest over the death of George Floyd in Washington D.C. Picture by: Liu Jie/Xinhua News Agency/PA Images

Recent days have also seen Mr Trump claim, without evidence, that the protests have been 'professionally' organised.

On Saturday night, meanwhile, the mayor of St Paul in Minnesota rowed back on his previous claims that most people arrested were from out-of-state - saying earlier information he had been given was 'inaccurate'.

He said: "The act of protesting should never be allowed to overshadow the reason we protest.

"It should not drive people away from the just cause that protest is meant to advance."

The Minneapolis police officer who knelt on Mr Floyd's neck is due in court tomorrow charged with third-degree murder.

Main image: A demonstrator holds a sign during a protest the death of George Floyd, Saturday, May 30, 2020, near the White House in Washington. Picture by: Evan Vucci/AP/Press Association Images

Varadkar: US has seen 'absence of moral leadership' in recent days