Over €1.1m lost so far this year due to online shopping fraud

Irish people have lost over €1.1m so far this year through online shopping frauds. It comes as ...

Over €1.1m lost so far this year due to online shopping fraud

Irish people have lost over €1.1m so far this year through online shopping frauds.

It comes as new figures show that consumers are now spending more money online than they are in person for the first time.

An Garda Síochána is taking part in a Europe-wide campaign to promote safe online shopping during the Christmas season and beyond.

Between January this year up to October 31st, 489 online shopping frauds were reported to Gardaí.

One woman, Ailish, told Lunchtime Live she was taken in by a Facebook page.

She ordered Christmas wreaths on a page, which then took her to a website.

"It looked absolutely fabulous - it was green wreath, big red babuls on it, a big red bow - it really looked outstanding.

"And I did look at the comments, there was a lot of people, a lot of interest... so I was just so eager to get it".

"It came up as $27 so I just put it into PayPal and I paid for it - I never even checked the bank to see how much it actually was".

"Lo and behold in the package comes, I go in and I check the package... and it ended up being this small, small cushion.

"It was made of wool inside, it didn't even feel like a cushion".

"So I did pop a review up on Facebook - I was more annoyed than anything else."

She said she contacted the company, who have not responded to her, but PayPal is set to investigate the issue.

"So it's just a waiting game, and it's not even to get the refund - it's more the principal of it".

She said her big take from the experience is to shop around, and shop local.

"The big thing I'll take from it is that maybe I should have looked into it because... the amount of people that text me saying 'I do wreaths, I'm only around the corner' - I didn't even go in and check."

"So it kind of made me a bit more aware that you can shop local, especially with what's going on now".

Another such incident happened when a 69-year-old man from Co Laois purchased a JCB online for €15,000.

The JCB was not delivered as a website had been set up to advertise machinery from a fake company.

While a 52-year-old woman from Leitrim was buying a Playstation Pro 4 for her child on an online trading forum.

She engaged with the seller through the messaging app on the forum, and transferred €240 to a bank account.

The Playstation never arrived and the seller has gone offline and will not reply to messages.

Another 24-year-old woman from Kerry purchased two tickets via Facebook.

Money was transferred online through AIB directly to the account of the seller.

The two concert tickets have not been received and the seller cannnot be contacted.

Gardaí say a fake identity was used to open the bank account.

The average loss was €2,306 per incident - representing an overall loss to Irish citizens of €1.127m.

The business community are frequently targeted by fraudsters using stolen or compromised credit cards, bank accounts or payments in what is called 'card not present' fraud.

Businesses who are victims of this fraud will suffer losses under the 'charge back' process.

An Garda Síochána and Europol advise consumers to follow the 'golden rules' for online shopping.

Businesses are also warned to protect their sales and revenues by identifying risks: know their product, know their customers, utilise safe means of payment and use reliable delivery methods. 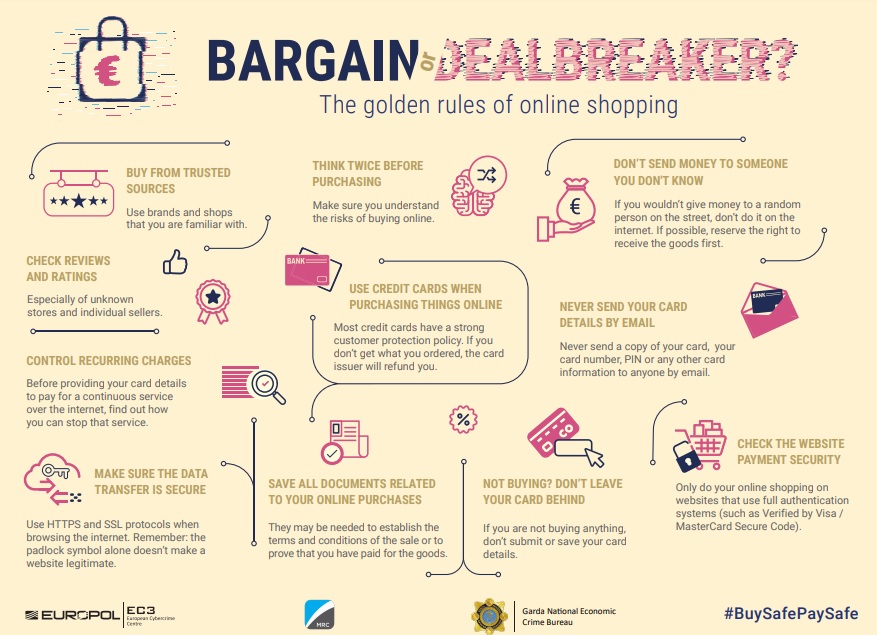 Level five restrictions mean that since November 1st, an unprecedented 51% of consumer spending has been done online, according to new data from Revolut.

Before the first lockdown in March, around 25% of consumer spending was taking place online.

In lockdown one that spend started moving onto the internet - but once stores re-opened, shoppers quickly went back to physical spending.

During September, around 70% of national spending was still being done physically, with just 30% on the internet.

However after October 21st, consumers started increasingly spending online - and by October 31st, spending was split exactly 50/50 between online and offline.

And online shopping has continued to make up 51% of consumer spending since then.

While the country's move to spending online is likely to be heightened by the arrival of 'Black Friday' in late November - the biggest event in the online shopping calendar.

US reward for information on Kinahans is a 'game changer', says ex-Garda Commissioner

US imposes sanctions on the Kinahan cartel