There is no longer any need for COVID restrictions at maternity hospitals, according to the Taois...

There is no longer any need for COVID restrictions at maternity hospitals, according to the Taoiseach.

It comes after protesters gathered at four hospitals calling for partners to be allowed to join pregnant people at appointments, scans and in the early stages of labour.

The HSE has issued guidelines advising hospitals to ease COVID-19 restrictions; however, they remain in place in some areas as each hospital is left to make its own rules.

This afternoon, the Taoiseach Micheál Martin says that should not be happening.

“There is no need now for these restrictions at all,” he said. “I said that last week in this house.

“The Chief Medical Officer has said that, given the success of the vaccination programme, particularly in the healthcare setting, the suppression of the virus among frontline healthcare workers and the high level of vaccination across the country, with proper precautions, the partners should be able to attend.” 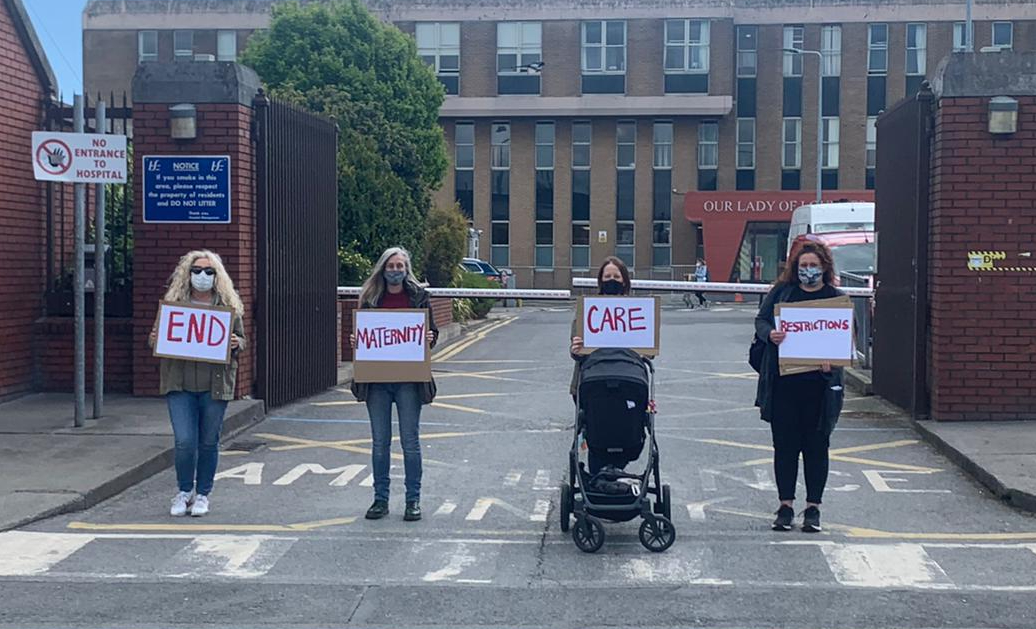 Earlier the Health Minister Stephen Donnelly said the restrictions should be lifted unless there is a safety issue at a particular hospital.

He said hospitals around the country should be following the same rules.

“The restrictions should be lifted in all cases except where there is a compelling reason to have restrictions in place,” he said.

This afternoon’s protest was organised by advocacy group AIMS Ireland (Association for Improvements in Maternity Services Ireland) – which is calling for partners to be allowed to attend all scans and all stages of labour.

The group is insisting that there is no published evidence supporting the need for the current restrictions.

“I really welcome that news from Stephen Donnelly because that is a new piece of information,” she said.

“Everybody is, I think generally agreeing that the restrictions need to ease. So, what we need now is a clear timeline; we need to identify where different units need extra supports and we need to make sure they have those.

“We also need clear understanding on where, perhaps, it is a little bit less safe.”

Orla Kirby, who gave birth sixth months ago, said it was terrifying to be separated from her husband.

“I ended up having a C-section in the end,” she said. “My husband was allowed to stay for an hour and then he was sent home; he was asked to leave.

“I was brought back to the ward, I was numb form the waste down, I was trying to care for my daughter and I didn’t see my husband until 7pm that evening.

She said her husband never got to attend any scans with her – and noted that when she first went into labour, she remained at home as long as possible for fear she would be separated from him while giving birth.

Newstalk has been highlighting the concerns of new mothers right through the pandemic.

Yesterday, a Dublin councillor whose young baby died late last year warned that the maternity restrictions were forcing women to go through ‘some of the most traumatic experiences of their lives completely unsupported.’

This afternoon, a woman who gave birth just a week after losing her own mother said it is "shocking and absolutely shameful" that maternity restrictions are still ongoing.