Mother and Baby Homes: TD claims Government not 'in right reality' of GDPR

A TD has claimed the Government is misinterpreting the rules of GDPR over Mother and Baby Home r...

Mother and Baby Homes: TD claims Government not 'in right reality' of GDPR

A TD has claimed the Government is misinterpreting the rules of GDPR over Mother and Baby Home records.

It comes as a 4,000 page report into the homes will be handed over to the Government later on Friday.

It is expected the Commission of Investigation report will not be made public for a number of months, while it is reviewed by the Attorney-General.

Victims of these homes were told earlier this week that they will be able to access their personal records through GDPR in an apparent u-turn by the Government.

It outlined a plan for survivors to be given access to their personal records, in a manner consistent with GDPR rules.

It means when the archive of the Commission of Investigation is transferred to the Department of Children, Equality, Disability, Integration and Youth people will be able to make access requests for information.

These will be considered on a case-by-case basis by the department.

But People Before Profit TD for Dún Laoghaire Richard Boyd-Barrett is worried that access could still be limited.

He told The Pat Kenny Show: "It's not clear whether anything really has changed.

"And I think what happened in the Dáil last week was a disgrace.

"This is an issue that is deeply sensitive for thousands and thousands of people who went through Mother and Baby Homes - in many cases suffering abuse.

"It's about people's history and identity, and the Government guillotined a bill through - unnecessarily in my opinion - which needed really detailed scrutiny, where there needed to be real consultation with survivors groups, with those who went through the institutions to deal with this matter.

"And it's really only because of a huge uproar about what the Government have done and... very importantly a claim, which I think was a baseless claim to justify all this, that somehow this archive is going to be destroyed when there was no basis for that.

"And the prospect that records about this really dark chapter in our history, where there needs to be transparency and openness - and indeed where people need access to their identities and their histories - that some of that information might be sealed.

"And it is not clear to me since the uproar - notwithstanding some back-tracking rhetorically from the Government - that anything has fundamentally changed.

"They still seem to be looking for reasons and a basis on which they may limit access of survivors and people to their identities and their histories." 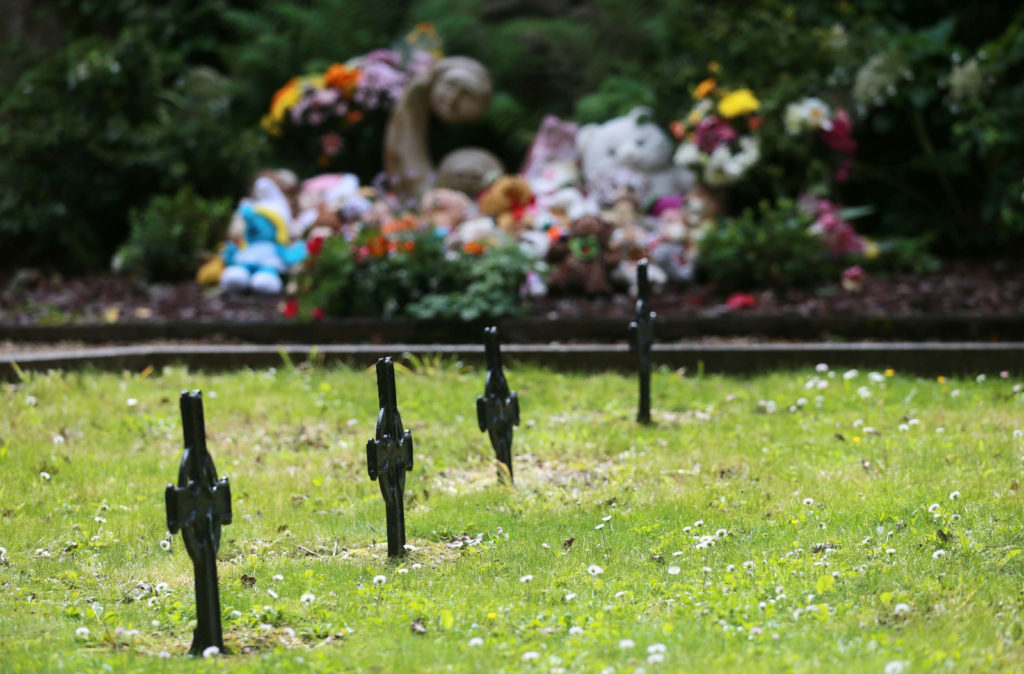 Children's teddies and toys along with flowers sit at the 'Little Angels' memorial plot in the grounds of Bessborough House in Blackrock, Co Cork. Picture by: Laura Hutton/RollingNews.ie

"It's unclear whether the interpretation of GDPR that the Government are utilising is the actuality of GDPR.

"GDPR actually gives people pretty much unfettered access to their identity and history and records relating to those things.

"However, even now, the Government seem to be saying that that access might be limited on the basis of how it might impact on the future activities of a commission.

"There's no basis in GDPR whatsoever for that.

"So it seems to me that the Government have been operating on a definition of GDPR which is not the right reality of GDPR.

"And they've been doing that in order to limit access and limit openness and transparency when it comes to these records - which are so important for individuals, and indeed for the for an honest accounting of the history of this country."

Main image: The Sean Ross Abbey in Roscrea, Co Tipperary - which was a mother and baby home operated by the Sisters of the Sacred Hearts of Jesus and Mary from 1930 to 1970 - is seen in this July 2014 photo. Picture by: Niall Carson/PA Archive/PA Images