McGuinness: Many EPP MEPs 'not at all happy' about Hungary's actions

Many European People's Party (EPP) MEPs are "not at all happy" about actions being taken by Hungary during the coronavirus crisis, according to Mairead McGuinness.

The Fine Gael MEP and Vice President of the European Parliament spoke to Moncrieff today about Brexit, the COVID-19 crisis and increasingly controversial moves made by the Hungarian government and its Prime Minister Viktor Orban.

McGuinness: Many EPP MEPs 'not at all happy' about Hungary's actions

Hungarian politicians have given Mr Orban the power to rule by decree during the current crisis - although with no set end date for the new powers.

It has led to further concerns about the rule of law in the country, following a range of other controversial moves by the Hungarian government in recent years.

There has been particular criticism of Hungary's continued role in the EU - as well as Mr Orban's party's membership of the EPP, a group which includes Fine Gael and Angela Merkel's CDU.

Speaking today, Ms McGuinness said: “Hungary has given us all a headache, and it’s no secret that Viktor Orban’s party is part of the EPP group, the family I sit with.

“Many of my colleagues said very clearly that this is a step too far.

“The Commission are looking into it, but I think we need to be more proactive."

She explained that the concern is that the current emergency is being seen as "an opportunity by an already very strong leader… he models himself on somebody the other side of the pond, and he rules by decree".

She noted: “All of us will put up with emergency measures, even being told we can’t go out, if we know it’s in the interest of our own health and the good of the country. But at some point those measures have to be withdrawn and life has to come back to normality.

“The fear is in Hungary the extra powers will be used for bad purpose and not good… there’s an awful lot of discussions about what to do."

Mrs McGuinness said officials will have to consider whether EU funding should only go to countries that obey the rule of law.

She also pointed out that Mr Orban does not want to leave the European Union - but he is also "not a fan of liberal democracy".

She observed: “His physique and personality is of the strong man.

“He’s not complying with the founding principles [of the EU] - he argues otherwise." 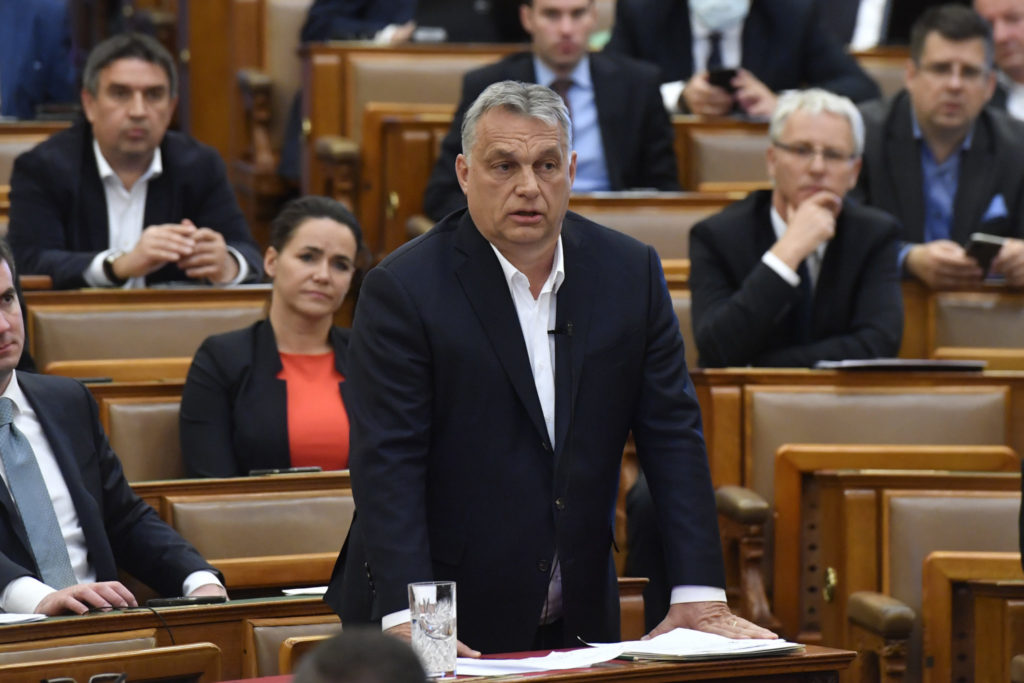 Ms McGuinness said it's important that the European Commission has the power to investigate what all member states are doing around emergency measures during the current crisis.

While acknowledging that remote working has made rapid action challenging, she stressed: "I think the response to the emergency measures in Hungary are so loud and of great concern that they cannot be left until after the crisis passes… there will have to be some action way before that.

“Politically, the focus is on trying to persuade Viktor Orban that what he is doing does not comply with anything Europe stands for."

In terms of her own party, Ms McGuinness said there has already has been sanctions against Mr Orban's party, but they "seem to have gone into the cold store".

She explained that the party was suspended from the EPP, and that a more thorough investigation was ordered but has not been completed yet.

She observed: “There are a lot of people in my group in the European Parliament who are not at all happy about what Hungary is doing or saying.

"It doesn’t reflect well on us if there is one group in our family who are doing things we believe are against our core values… so I do think there will be action on that. I do hope it is sooner rather than later.

“I think it’s really tragic when countries are trying to deal with looking after their elderly and vulnerable, that you would have any country use this time to centralise power and take decisions which we don’t believe are in the best interests of democracy as we practice it."

Elsewhere, Ms McGuinness said it's "quite extraordinary" Brexit has suddenly been pushed far down the agenda, "because we spent three very tough years, and it was the only thing we talked about".

She said efforts are being made to keep talks going between the EU and UK amid the current crisis, although there are obvious practical problems.

The EU's chief negotiator Michel Barnier was diagnosed with COVID-19, as have several members of Boris Johnson's team - including the British Prime Minister himself.

Ms McGuinness said it has to be asked whether "sufficient mental capacity [is] going into these negotiations" given the more immediate public health crisis, and that the current situation has made an already difficult situation more difficult again.

In terms of a potential delay to the Brexit negotiations, she suggested: “It would have to come legally from the UK themselves… I doubt if the United Kingdom and Prime Minister Boris Johnson would be minded to request an extension.

“Maybe, when the full extent of this public health crisis unfolds… there might be a realisation of ‘what’s a few months’ if we are to extend that deadline. But the politics would need to change in the United Kingdom."