'Too late to evacuate': Some in path of Australian bushfires told to stay put

Some people in the path of fierce bushfires in Australia have been told to shelter indoors becaus...

'Too late to evacuate': Some in path of Australian bushfires told to stay put

Some people in the path of fierce bushfires in Australia have been told to shelter indoors because it is too late to evacuate.

About 30,000 holidaymakers were urged to leave East Gippsland - a tourist hotspot in Victoria - but the local mayor said many people had ignored the plea.

The Princes Highway - the main road in and out of the area - has now been shut.

Those left are being warned to take shelter and not attempt the 200-mile journey out because they risk getting trapped by the fires.

A Sky News Australia reporter, Andrea Crothers, said she had witnessed some people rowing with police because they were not allowed through.

Officials said the state of Victoria had seen a "challenging day" on Monday. 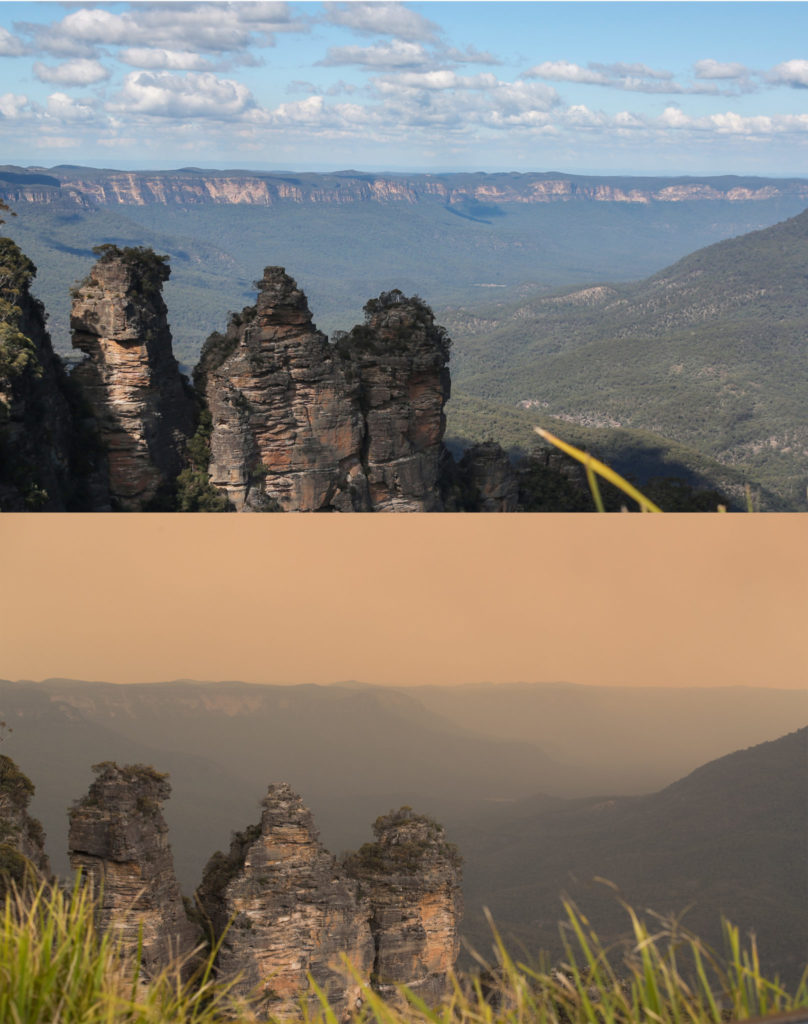 This combination photo shows the Blue Mountain area before (top, taken in May 2019) and after the bushfire (bottom, taken on December 21st) in New South Wales, Australia | Image: Bai Xuefei/Xinhua News Agency/PA Images

Temperatures peaked at 41°C in Melbourne, with areas southwest of the city reaching 44°C.

Another 16 fires were started by lightning overnight, bringing the total to 97, with 43 of those not contained.

It comes as a volunteer firefighter was killed and two others burned when their truck rolled over in strong winds of 70km east of Albury in New South Wales.

More than 70 new fires have been reported in the state of Victoria, and about 20 remain active. Some of the latest were caused by lightning.

Emergency Management Commissioner Andrew Crisp warned: "This is a high-risk day for Victoria. This is a day we do not often see.

"People get out now, if you don't, you've got to stay across the conditions and listen to those warnings during the day."

The warm weather is rapidly heading into New South Wales, where temperatures are expected to spike on New Year's Eve as hundreds of thousands of people gather in Sydney Harbour.

The city has been smothered by smoke for weeks, and across New South Wales almost 900 homes have been destroyed and 3.6 million hectares of land burnt.

The Sydney Harbour fireworks have been approved to proceed tomorrow.

The NSW Rural Fire Service and Fire and Rescue NSW are assessing a number of other Total Fire Ban exemptions.#nswrfs #nswfires #frnsw pic.twitter.com/C3QtJtF5K8

There were fears that Sydney's famous fireworks would be cancelled but the show will go ahead.

Organisers have been given an exemption from the total fire ban, but some politicians have called for the spectacle to be called off, saying "the risk is too high".

Temperatures also soared on Monday in Tasmania, Australia's island state and its closest point to the South Pole.

It hit 40.8°C in the capital Hobart - more than double the summer average and hotter than Australia's tropical north.

The federal government has said it will compensate volunteer firefighters in New South Wales.

Australian Prime Minister Scott Morrison said payments of up to AUS$6,000 (€3,750) would be available for eligible firefighters who had spent more than 10 days in the field.

He added: "As this is a very prolonged fire season, this is putting additional demands on our firefighters.

"It means that the turnouts and the callouts have been far more extensive than in previous years, going well and beyond and above what is normally expected of those who are engaged in volunteer service."