Just one in 15 men say they purchase sex in Ireland

A new survey on public attitudes towards prostitution has indicated that only 6% of Irish men - o...

Just one in 15 men say they purchase sex in Ireland

A new survey on public attitudes towards prostitution has indicated that only 6% of Irish men - or one in 15 - say that they have purchased sex, but not regularly.

The study carried out by Red C shows a further 10% said that they have never purchased sex - but have considered it.

A further 10% say that they have never purchased sex but have considered it.

The newest survey was presented on Wednesday at the launch of the 'Prostitution - We Don't Buy It' campaign.

While small, the new survey indicates a drop of 2% in the numbers of men who responded that they have purchased sex since a previous survey carried out in 2015.

The survey also showed that the vast majority of respondents (70%) know that purchasing sex is now a criminal offence in Ireland, with over 64% agreeing that Gardaí need more resources to increase the number of arrests and prosecutions.

Over half (53%) think that criminalising the purchase of sex is a good idea.

These attitudes are highest for males aged over 55 and for women in general.

Barbara Condon, CEO of Ruhama, said: "We all know the jaded lies and the myths - like most women choose to be escorts, that lonely men are only looking for companionship with 'the girlfriend experience', or that prostitution is the oldest profession in the world.

"But the truth is that prostitution always has been, and always will be, nothing more than the violent, degrading abuse of the poorest and most vulnerable women and girls.

"In what other 'job' do women regularly experience being spat at, strangled, punched, and raped, or to be seen as legitimate targets for misogyny and men's violence?"

"The lies and the myths are the justifications that allow the continuation of a multi-million euro business that benefits criminal gangs and on-line pimping websites masquerading as businesses that are trading openly in human misery."

The new survey indicateed that 68% of Irish people believe that women and girls are drawn into prostitution as a result of difficult circumstances, such as poverty or other vulnerabilities. 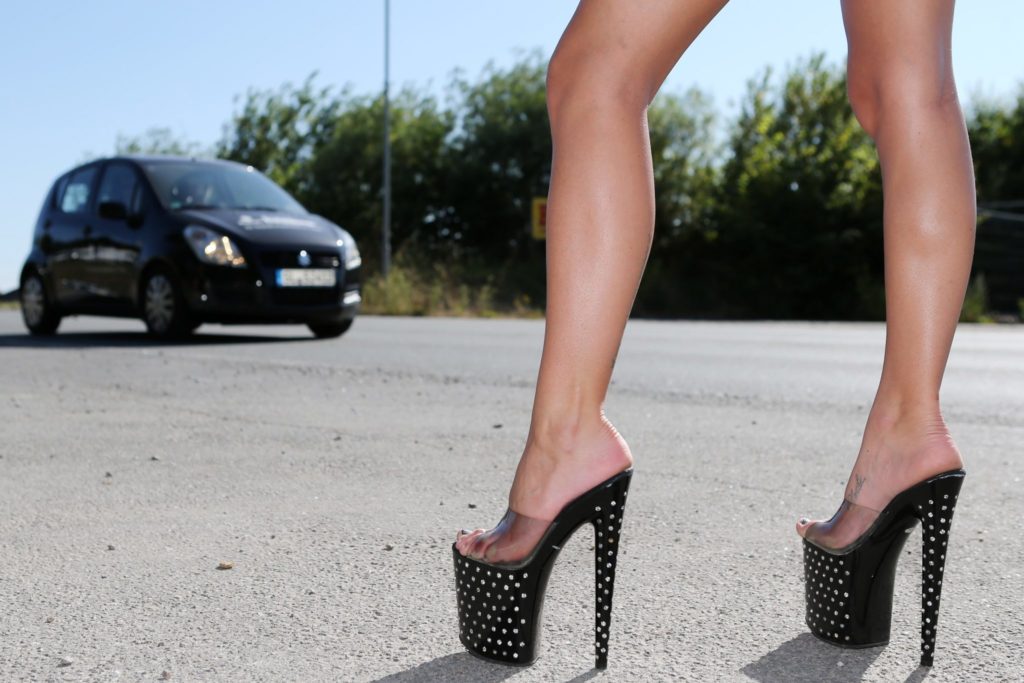 A 2013 file photo shows a prostitute in front of a brothel in Germany | Image: Malte Christians/DPA/PA Images

Only 8% believed that women and girls freely choose prostitution.

This demographic is less likely to feel that women in prostitution do so as a last resort, for example, and are also less likely than the general population to believe that the people who benefit most from prostitution are criminal gangs.

There are an estimated 1,000 women in prostitution in Ireland.

The majority are migrants who have been trafficked and exploited, a significant number as children under 18.

They are moved around the country and advertised online, often without their knowledge.

Rachel Moran, activist, author and survivor of prostitution in Dublin, said that there was a blindspot when it came to the rights of women in prostitution within the #MeToo movement.

"You simply can't buy consent. It's that straight forward.

"The delusion that sexual harassment, violence and rape is consensual in prostitution is so damaging and is the very thing that maintains an industry that is based on human entrapment, coercion and misery."

"This reality is being ignored for the most part within the #MeToo movement," she continued.

"In the global conversation about sexual harassment and sexual predation, brought to the fore again last week with the Harvey Weinstein conviction, women in prostitution are split off from other women, as undeserving victims and survivors of male violence."