A plan to fine people who litter with chewing gum simply has not worked.

That is according to the chairperson of Galway Tidy Towns, Niall McNelis.

A €150 fine is to be issued to anyone caught littering the streets with chewing gum.

The Gum Litter Taskforce (GLT) says one in five people say they used to drop or spit gum - but now don't.

While 92% of people recognise that dropped gum is litter.

But Mr McNelis told The Hard Shoulder the fines are not followed up on.

"The fine hasn't worked, unless you're going to physically follow up on the fine.

"Since 2006 this was set up, the Gum Litter Taskforce - and unless you're going to go after [them] and give that €150 fine out, then maybe you might get people.

"But it hasn't been done.

"I think there needs to be an awareness here... people talk about our climate and our environment.

"When these get on to your shoes, you bring them into your house, your carpet gets ruined, your car mat.

"And the animals that chew on this, like little birds, end up dying because of it as well". 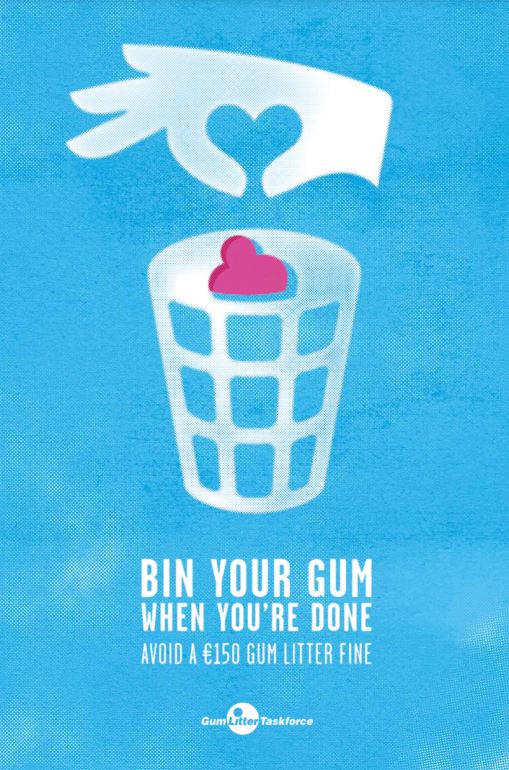 A Gum Litter Taskforce poster as part of a publicity campaign

He says there have been no such gum fines issued in Galway to date.

"There's been no fines issued in Galway for people dropping gum on the street.

"We did up the pedestrianised area of Shop Street... and we're about to the Latin Quarter of the Quay Street area.

"There's a bin right beside it - chewing gum is like your new cigarette butt.

"Years ago you would have just seen cigarette butts being thrown on the ground, and thankfully people have been giving up cigarettes now.

"And it doesn't take long to actually see it gathering up after a period of time.

"And there's a huge cost involved by the local authority to go off and hiring the steamer or hiring a power hoser [sic]".

He also praises street cleaning crews as "pure magicians" - but he adds that the gum has to be removed "piece by piece by piece, by taking each individual piece up off the ground".

He adds that a 'gum wall', showing people exactly what the litter looks like, could be the answer.

"In Seattle they've got a gum wall at Pike Place Market... there's a whole wall made up of chewing gum.

"And when you see it you go 'Oh my God, that's just absolutely disgusting' - maybe we need to introduce something like that, and just show people exactly what the gum looks like".