Irish Water has been told to cut its costs by over €100m by the Commission for Regulation of Ut...

Irish Water has been told to cut its costs by over €100m by the Commission for Regulation of Utilities (CRU).

The Sunday Business Post reports that the CRU found Irish Water's costs are up to 42% higher than those of similar utilities in Britain.

While it says the cost of treating wastewater is up to 62% higher here.

It is recommending that the utility reduce its costs from €722m to €610m over the next five years.

Irish Water is blaming part of the high costs on its reliance on 31 councils to deliver water services.

It also claims that not being able to operate as a single entity costs some €35m per year.

Separately, Irish Water submitted a revenue proposal to the CRU at the end of July.

It requested a total of more than €3bn in operational expenditure for the period of 2020 to 2024.

But the CRU instead proposed that Irish Water reduce its operating costs by €346m over that period.

"This represents an efficiency challenge of 2%, rising to 6% annual reduction in Irish Water's controllable operating costs over the period", the CRU says.

Since the CRU began regulating Irish Water, it has periodically reviewed costs and set revenues.

The first of these covered between October 2014 and December 2016 - the second was subsequently extended to 2019, due to changes in the funding model for Irish Water. 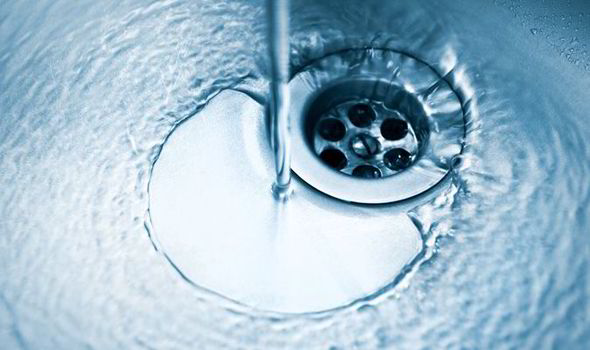 Last month, the utility was given the go-ahead to charge households that use too much water.

If a household is using more than they should be, they will get a warning letter before Christmas.

They will then have 12 months to address any possible leaks or reduce their usage before they are billed.

There will be a €1.85 unit rate charge per 1,000 litres consumed over the annual allowance, with a total capped charge of €500.

Meanwhile, it was revealed that 42,000 people have yet to receive a refund from the utility.

This amounts to €5.17m in outstanding monies to be refunded to 4% of customers.

Irish Water says this is because these customers have yet to confirm their details in order to receive their cheque.

In a statement, it says: "Currently there is no end date by which customers have to claim their refund.

"The scheme remains open and there are details on the Irish Water website".

"There may be a small percentage of customers who have moved abroad or passed away and who will never seek a refund but the funding allocation is there and will remain available to them or their estate."

It adds that these funds are kept in a separate account.