An Irish man living in Beirut has described the explosion in the Lebanese capital as 'something y...

An Irish man living in Beirut has described the explosion in the Lebanese capital as 'something you'd see in a horror movie'.

The number of dead in the blast on Tuesday has risen to 135, with around 5,000 injured and tens of people still missing.

Rescuers are also searching for survivors.

Lebanese President Michel Aoun said the blast was caused by 2,750 tonnes of ammonium nitrate - used in fertilisers and as an explosive - which was left in a warehouse for six years at the city's port.

The country's cabinet has ordered port officials involved in storing or guarding the material since 2014 to be put under house arrest.

A two-week state of emergency has been announced there as the disaster is investigated.

Anthony Clery lives about a half a kilometre from where the blast happened.

He has been there since June with his wife, Maria. 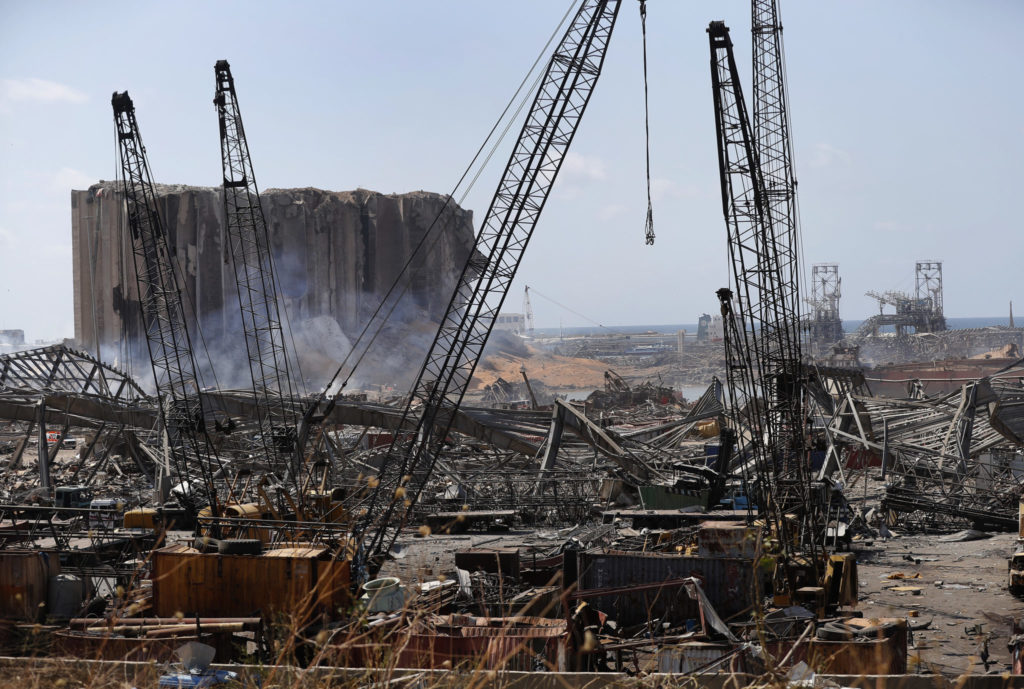 Extensive damage at the site of an explosion that hit the seaport of Beirut, Lebanon. Picture by: Hussein Malla/AP/Press Association Images

He told The Hard Shoulder: "Our apartment basically has three rooms: a kitchen that faces out on to the port, and then left to that our bedroom and left to that our guest bedroom/my office.

"I work remotely there, and each room has a floor to ceiling window that gives us an amazing view of the harbour.

"I had a call at 6pm local time, so I sat down at my monitor... I saw a building in front of me go up in smoke.

"There's nothing obstructing my view, there's just a small two-storey building site in front of me and we're on the sixth floor.

"First reaction I didn't know if it was just a local fire or - being a westerner in Lebanon - the fear is that it was something more sinister.

"But I didn't hear Maria say anything or shouting or screaming, so I kind of assumed it was just some local accident.

"I took a photo on my phone to share with the guys in my office... and by the time I pressed click and looked down, the second explosion happened.

"Looking back and seeing the videos, that was clearly the blast - the mushroom that everyone's seen now that decimated the entire city.

"But for me when I was sitting in my room, I thought it was the building next to us exploding.

"We're next to a hospital and a police station."

"I have to say any movie you've seen, it gives it justice - it's kind of a vacuum noise of air, the glass shatters you're thrown back.

"Thankfully being in a guest room/office [I was thrown] on to the bed behind me, not against the wall.

"Glass everywhere, smoke everywhere and that ringing in your ears... that one long kind of tinnitus ringing noise.

"And then when the smoke cleared the ringing noise went down I heard the screaming and the shouting in the rubble.

"I looked down and saw I was covered in blood, cause I got lacerations across my head and my legs and feet cause I was wearing shorts.

"But thankfully my monitor and desk probably took a lot of the damage as well from the glass coming in.

"My first reaction was to run to Maria, to call her name, and I hard her shouting in the corridor behind.

"I hopped over all the glass barefoot and saw her and asked is she OK.

"Her friend who is over cleaning the apartment had seen the explosion and ducked in on the corridor where there are no windows. 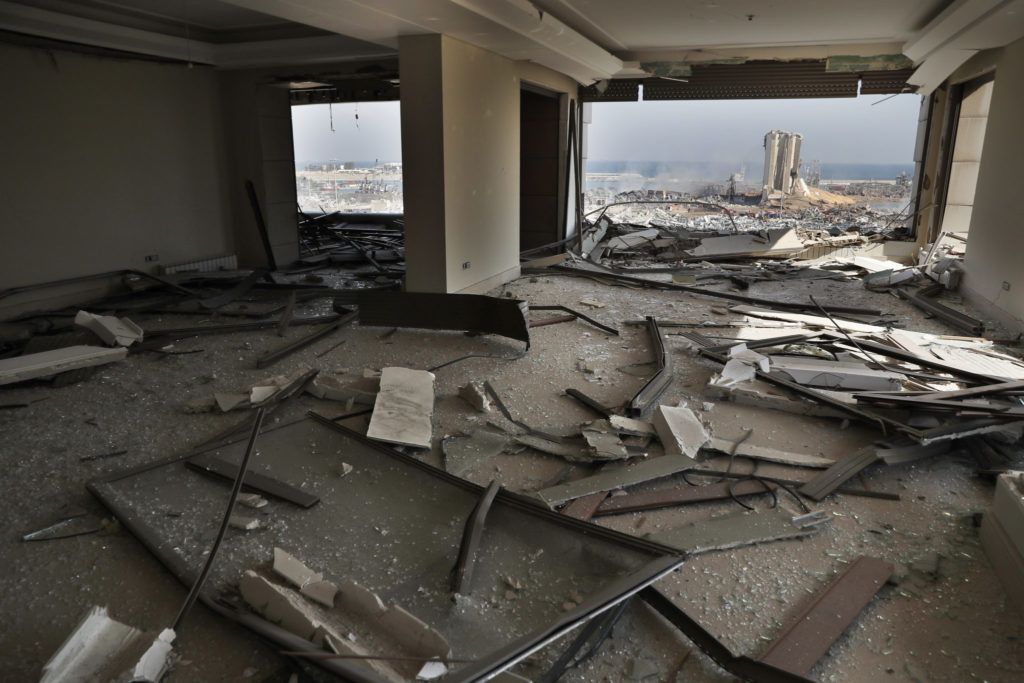 The scene of the explosion that hit the seaport of Beirut is seen through a damaged apartment in Beirut, Lebanon. Picture by: Hussein Malla/AP/Press Association Images

"Maria kind of stood there like a deer in headlights staring at the explosion.

"As I grabbed her arm and pulled her in, a second later the blast came right through the kitchen - splitting the kitchen table in half - collapsing the fridge... and the entire front door of the apartment, including the walls around the front door, blasted off".

He said they then went outside, barefoot, "over the next 20, 30 minutes walked through the streets.

"And it was literally something you'd see in a horror movie.

"Everyone, collapsed cars inverted, the hospital next to us with people coming out wearing their gowns and their drips, just complete and utter chaos.

"We spent two and a half hours walking through broken glass, hitchhiking until we eventually got a taxi to drop us to her father's house up in the mountains.

"After a couple of hospital visits we found one...that wasn't too inundated that they were able to remove the glass and give me stitches.

"We're very grateful and fortunate that we have people outside the city."

"There's at least 3,000 [people] so far who are homeless at the moment in the city, and this is after going trough an economic, political and COVID crisis all in the same 12 month period.

"Of all the cities in Lebanon, Beirut is the one that was surviving the best." 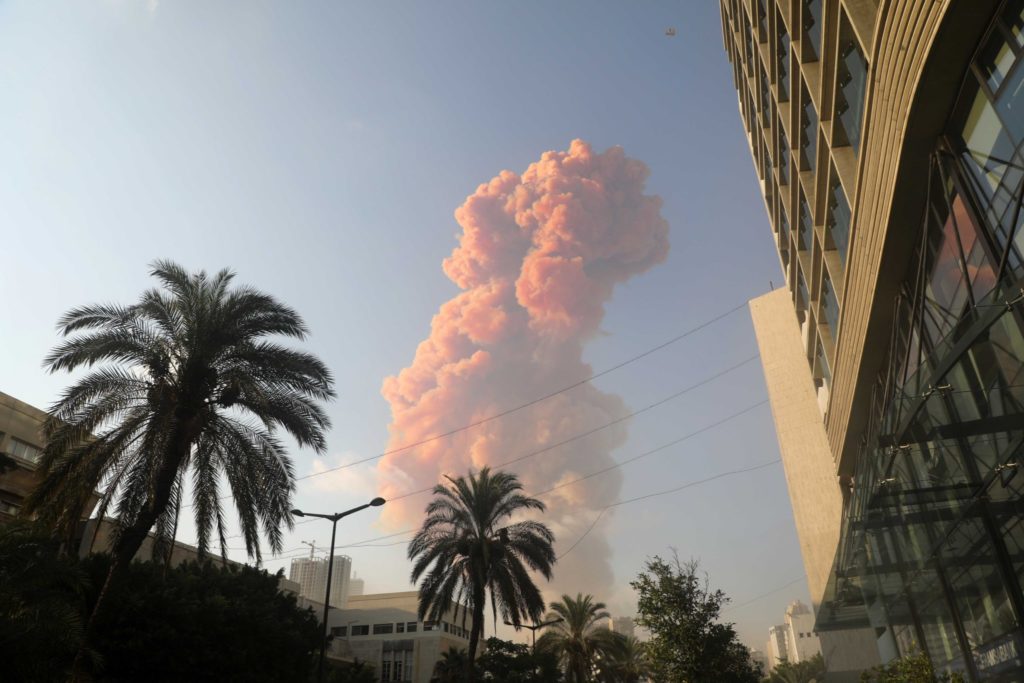 "And now they've had a bomb go through it so their whole country is just decimation, and that's why we're making these calls for help - for people in Ireland to give whatever they can to the Red Cross in Lebanon".

"An analogy I gave in another interview just to give you scope, because Ireland and Lebanon in population, size and density are very similar.

"Where we were, essentially, the sixth floor of a Google or Facebook building in Grand Canal, and the port harbour there just exploding.

"And imagine every glass window from Blackrock to Howth shattering, and people from down as far as Wicklow town to Drogheda, hearing the noise in Wales from the explosion.

"And for the next two and a half hours walking along the Liffey until you get to... say Sandyford, the Blue Light Pub, and looking back behind you just seeing smoke and rubble.

"That's essentially the equivalent of what would happen if that bomb had gone off in the Docklands in Ireland".

Up to 250,000 people have been left homeless and families are still counting the casualties and searching for the dead.

Many people spent the night going from one hospital to another, desperate for any news about missing loved ones.

Lebanon's Prime Minister Hassan Diab declared a day of mourning and pledged those responsible would "pay the price".

He said his country was experiencing "a real catastrophe" and appealed to other nations for help.

The blast struck with the force of a 3.5 magnitude earthquake, according to Germany's geosciences centre GFZ, and was heard and felt as far away as Cyprus - more than 200km across the Mediterranean.

A mushroom cloud could be seen spreading over the city.