The Government has confirmed that it will oppose EU plans to end daylight savings clock changes. ...

The Government has confirmed that it will oppose EU plans to end daylight savings clock changes.

The EU plans would have abolished the bi-annual clock change and allowed each member country to decide whether to remain in summer or winter time year-round.

When the plans were first announced, nearly 85% of Irish people indicated they were in favour of it.

However, the Government said its Interdepartmental Steering Group found that the vast majority of people would not support any system that allowed two different time-zones on the island of Ireland.

Minister Flanagan said the Government also shares concerns that the plan could result in a ‘patchwork’ of different time-zones across the EU - potentially harming the functioning of the Single Market.

“While I acknowledge that many favour ending the practice of seasonal clock changes, the proposal is not a straightforward one," he said.

“It would be profoundly serious if two different time zones were to exist on the island of Ireland, creating significant unnecessary problems for people living on the border and for the all-island economy.

“I am heartened to note that the Government’s decision today is in agreement with 82% of the public in a representative opinion poll held as part of the consultative process.”

The opinion poll was carried out among 1,000 respondents and was conducted by Amárach Research.

The public consultation received over 16,000 responses and the group heard over 50 submissions from key stakeholders.

Some 82% of respondents to the Amárach poll were not in favour of any measure that could result in different time-zones on the island of Ireland.

However, the larger public consultation turned up a different result.

Of the 16,000 responders, just over 81% said they wanted an end to the clock changes with just over 84% saying they would like to remain in summer time.

However, only 21% said they felt Ireland must remain in the same time zone as the North. 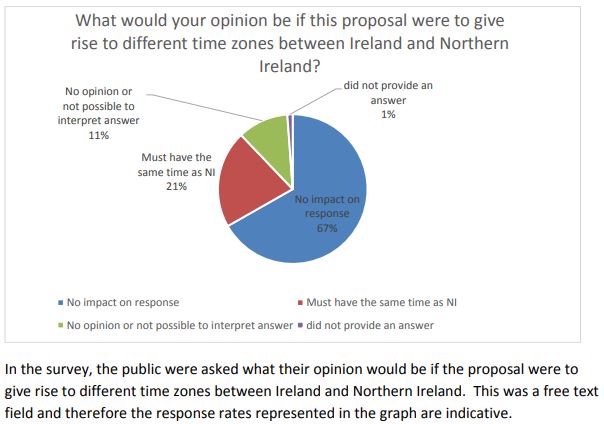 Some 67% said the potential for different time zones would have no impact on their opinion, while 11% said they had no opinion on the matter.

A spokesperson for the Department of Justice said the Government based its decision on the final recommendation from the working group - which weighed up the findings of the poll, the consultation and the submissions.

He said that while the public consultation was "very useful," it was a self-selecting process and as such was likely to attract people who already hold strong opinions on clock changes - but not necessarily the all-Ireland question.

Responders to the survey could also pick and choose which questions to answer.

In contrast, the Amárach poll provided a representative sample of public opinion and was carried out by an approved market research company.