New figures from the Irish Nurses and Midwives Organisation (INMO) suggest trolley overcrowding was worse in 2019 than any other year.

It says 118,367 patients went without hospital beds last year, which it says confirms 2019 "as the worst-ever year for hospital overcrowding since records began". 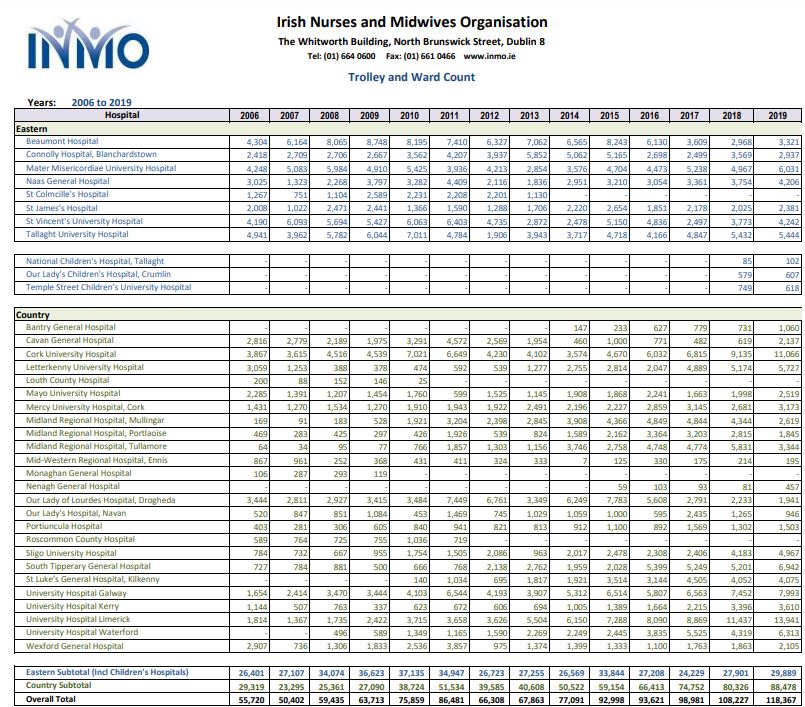 A comparative breakdown of 2019 overcrowding figures for each hospital | Source: INMO

The INMO claims under-staffing and a lack of capacity were key drivers of overcrowding.

"There are 411 fewer inpatient beds in Ireland's hospitals today than a decade ago, despite a larger, older population", it says.

INMO General Secretary Phil Ní Sheaghdha says: "Things are getting worse, not better - these figures should be falling, but we're going the wrong direction.

"2019 saw thousands more patients without proper beds - often at one of the most vulnerable points in their lives.

"Overcrowding used to be a winter problem. Now it's an all-year problem, which gets worse in winter.

"The most frustrating part is that we know how to solve this problem: increase staffing and bed capacity, expand community care, and get going with the Sláintecare reforms."

"Instead, the HSE continues to enforce its rigid recruitment controls, starving hospitals and community services of the staff they need.

"Our members are rightly appalled by the conditions they are forced to work and care for patients in."

She has called for under-staffing and overcrowding to be brought under control in 2020, but adds: "That simply won't happen without investment and an end to the recruitment ban."

Twindemic: Ireland has to 'get lucky' this winter - Staines

Australian nurse who moved to Ireland waiting 14 months for registration