A Guard who helped deliver a baby in a carpark last week said he knew something was not right as he drove by.

Garda Eric Carney from Connemara had just started his shift when he noticed a couple in distress.

Peter and Kelly Gannon had pulled in at a Garda station as Garda Carney was passing.

He told The Hard Shoulder: "I was on my way to work, I was driving through Letterfrack, I was passing the Garda station in Letterfrack and I knew at the time there was no one working.

"But I seen a car in the carpark, it had double indicators on.

"I drove past and I was just thinking to myself 'There's something not right here', so I turned and went back.

"As I drove in Peter - the father - came to the back of the car and identified himself as a member of An Garda Síochána and he said 'My wife's in labour'".

Eric said while an ambulance had been called, he was told it was 50 minutes away.

"At this stage then, Peter was shouting for help... I had my towels with me - when I go to work I get ready at work - so I just grabbed them and ran over.

"The head was out at this stage". 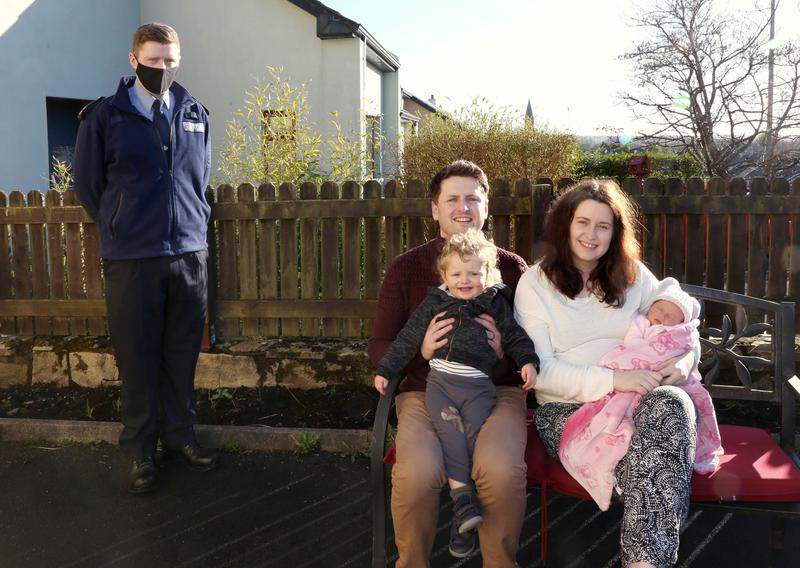 Eric said while Peter was initially on the phone to Ambulance Control, to give him instructions, he then took the phone.

"It was kind of a bit windy that night, so I took the phone off him and was kind of relaying back what they were saying to him.

"She gave birth there in the passenger seat of the car to baby Cara.

"He'd to take his shoe lace off to tie it around the chord, and [we were] waiting then for the ambulance to arrive".

Eric said he has been trained to handle such situations.

"You are trained to keep calm in any sort of situation, and the main focus was keeping them calm as well.

"As we were waiting on the ambulance then, we've so much first aid training, you're just keeping an eye on the baby and the mam Kelly".

"Luckily too the local Westdoc, he arrived about 20 minutes after the birth, so we had a doctor there as well then".

Asked if he would have lobbied for the name 'Erica' for the new arrival, he joked: "She'd a hard enough start in life - I wouldn't put that pressure on her".

Bodies of mother and baby boy discovered in Lucan in Dublin