The Green Party has apologised after it claims comments made by its leader Eamon Ryan over rural ...

The Green Party has apologised after it claims comments made by its leader Eamon Ryan over rural car-sharing schemes were "badly misrepresented".

It says: "Recent comments by Eamon Ryan regarding rural car-sharing schemes have been badly misrepresented online and in the media.

"We deeply regret the hurt this has caused to rural communities".

Earlier this week, Mr Ryan suggested that hundreds of families in rural Ireland could share cars in a local village.

"There's no reason in rural Ireland that we couldn't have a scheme - let's say in a local village - where if there's 200 or 300 families, let's have 30 cars which we share.

"There'll always be one available, it's a short walk down to pick it up.

He also suggested on Virgin Media's 'Ireland AM' programme that people could "cycle down to the local collection point".

On Friday, citing an Irish Times article, The Green Party claimed "reports have been wildly inaccurate". 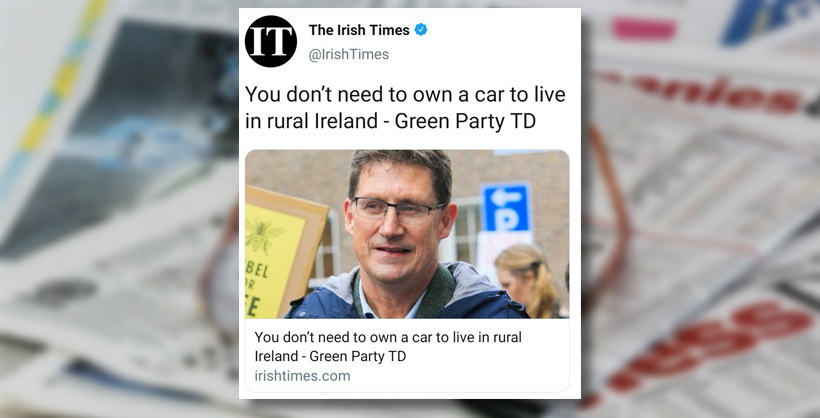 A statement adds: "The Green Party does not stand for restricting car ownership, and to state otherwise is a huge misrepresentation of the party position and of Eamon's comments.

"What Eamon Ryan proposed was that car sharing could provide people in rural Ireland with extra options.

"So cars and car sharing."

It also says that "lack of investment in rural transport means thousands of people are locked-in to car dependency."

"People want and need options. They need a way of getting around that is much cheaper and may provide an alternative to the cost of owning and running one or more cars."

The party adds: "Car sharing schemes won't work everywhere or for everyone, but there are rural communities who are already doing this."

It references Cahersiveen, where it says locals have started a carpooling group - while it adds that Clare County Council are piloting a scheme as part of their Rural Development Strategy.