The dangerous bacteria E. coli, which can cause kidney failure, was found in 62 private water sup...

The dangerous bacteria E. coli, which can cause kidney failure, was found in 62 private water supplies in 2018.

The Environmental Protection Agency (EPA) has released their latest report on private water supplies, which serve more than a million people every day.

Monitoring carried out in 2018 found the overall quality of water in these sources, mostly sourced from wells, is "consistently poorer" than in public supplies. 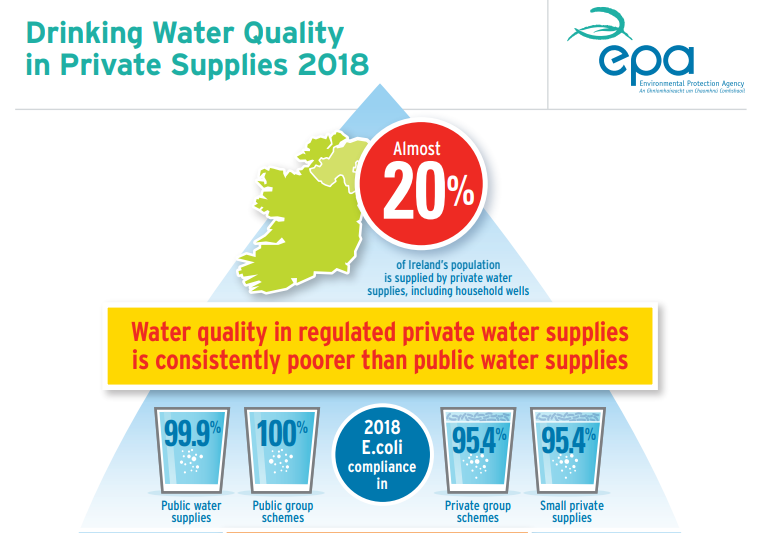 More than 60 private supplies were found to be contaminated with human or animal waste in 2018.

This can cause illness and, in some cases, can result in severe or long-term kidney failure.

There were also more than 1,000 reported cases of the VTEC infection - a dangerous form of E. coli, which people can get from drinking water contaminated with animal waste.

VTEC infections were up a total of 22% compared to 2017, the EPA says - with the agency adding that Ireland has the highest incidence of this illness in Europe.

Dr Tom Ryan, director of the EPA’s Office of Environmental Enforcement, explained that water coming from poorly-constructed wells can mean a high risk of contamination during heavy rain.

He observed: “We are concerned about the poor quality of drinking water in private supplies serving commercial or public activities such as crèches, nursing homes and hotels.

"It is worrying that many of these supplies are not being monitored, as consuming contaminated water poses a serious health risk to consumers, particularly vulnerable people such as the young or elderly."