Donald Tusk has formally handed over the presidency of the European Council to his successor Char...

Donald Tusk has formally handed over the presidency of the European Council to his successor Charles Michel.

At a ceremony in Brussels today, Mr Tusk said he was "very proud" of his five years as head of the Council.

He said: "I have had the privilege to serve Europe. Not to serve an abstract idea, but people, nations and their common interests.

"Europe is the best place on Earth, at least as long as it remains a continent of freedom and rule of law, which is inhabited by a community aware of its history and culture."

Reflecting on his own time as president, he recalled: "From the early months of 2015 Europe has been struggling with crises: Greek, migration, Ukrainian, ISIS and its terrorist attacks inside our borders, and a moment later came Brexit.

"Some observers included in these crises the rule of two Donalds, in Washington and Brussels, but personally I think that this opinion is only half-true."

Mr Tusk has already secured a new role as the president of the centre-right European People's Party.

Mr Michel, meanwhile, takes over the European Council role this weekend following his term as prime minister of Belgium.

It will be a privilege to serve the European citizens. #EUCO pic.twitter.com/94B8AjIbZ5

At today's ceremony, the president-elect praised his predecessor for having "lived your convictions and taken the hard decisions".

In a reference to Mr Tusk's often provocative remarks and tweets during his term in office, Mr Michel said: "I will have my own style. Open for dialogue and committed to building bridges and perhaps more cautious with my tweets, at least at the beginning.

"But I will certainly speak out when needed." 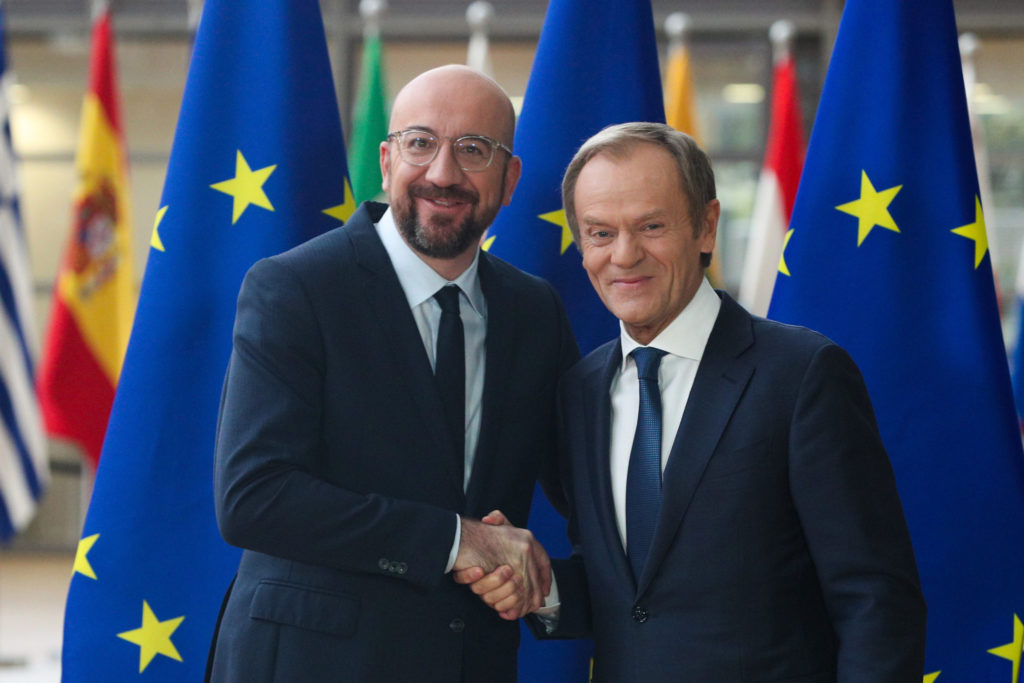 The outgoing President of the European Council Donald Tusk (R) and incoming President Charles Michel shakes hands during the handover ceremony at the EU headquarters in Brussels, Nov. 29, 2019. (Xinhua/Zheng Huansong)

The 43-year-old Belgian politician said he wants Europe to become "global leader of the Green Economy", adding: "We have to find a way forward that works for all Member States. And their people."

Time to say goodbye!
President @JunckerEU is in the press room today, for the very last time as the head of the European Commission.#TeamJunckerEU bids farewell to all of you.
Thank you, Mr President. 🇪🇺 https://t.co/vR9Rg1nGg9

Ursula von der Leyen and her team will take over from the current Commission on Sunday, after their appointment was approved by the European Parliament earlier this week.