A travel expert has said the potential for huge delays and queues at Irish airports needs to be i...

A travel expert has said the potential for huge delays and queues at Irish airports needs to be ironed out before people can travel internationally this summer.

Eoghan Corry, Editor of Air and Travel magazine, said there is a lot of uncertainty regarding the rules passengers will face when going on foreign trips in the coming months.

On Friday, the Government announced plans to resume international travel on July 19th.

It will start with European Union countries under the Digital Green Certificate, but there is a push by Government to expand this to the UK and the US.

The Green Cert, which shows whether someone has been vaccinated against COVID-19, tested negative or recently recovered from infection, will officially come into effect in the EU on July 1st.

However, Ireland will not adopt the system until July 19th.

It comes as a briefing given to Cabinet Ministers earlier this week also warned of potential ten-hour delays at Dublin Airport over the summer.

According to the Sunday Independent, it could mean the Terminal 1 arrivals hall is backed up - and passengers having to wait on planes.

Speaking to Newstalk Breakfast with Susan Keogh, Mr Corry explained that the need for social distancing and the additional documentation for flying will likely result in long queues at airports.

"There's a lot to be worked through, including that issue of delays at the airport," he said.

"It's not a big international problem but it certainly became a big Heathrow problem...I do think we are concentrating very heavily on what's happening in England when we should be looking to other countries and how their travel is opening up.

"Back to if we have a two-metre distancing requirement for a queue, what would have happened in 2019 in peak summer, we would have 102, 104, 106 adjoining gates of Ryanair flights taking off within a ten or 15-minute period, that's a queue of one kilometre for people to board if you're boarding at the same level.

"The same would be happening at arrivals when you have passport control and extra checks which are in place to make sure people are certified.

Mr Corry referenced comments made by Dalton Philips, the Chief Executive of the Dublin Airport Authority, and the Minister for Transport Eamon Ryan which highlighted that the existing infrastructure at Dublin Airport isn't built to cater for the restrictions passengers will be facing.

"First of all, for the health restrictions of the distancing and second of all, the extra documentation that needs to be checked," he stated.

"You can overstate that, the technology is awesome when you think of the scale of documentation that has to be managed now even for essential travel as it stands, the technological solutions have been quite breathtaking." 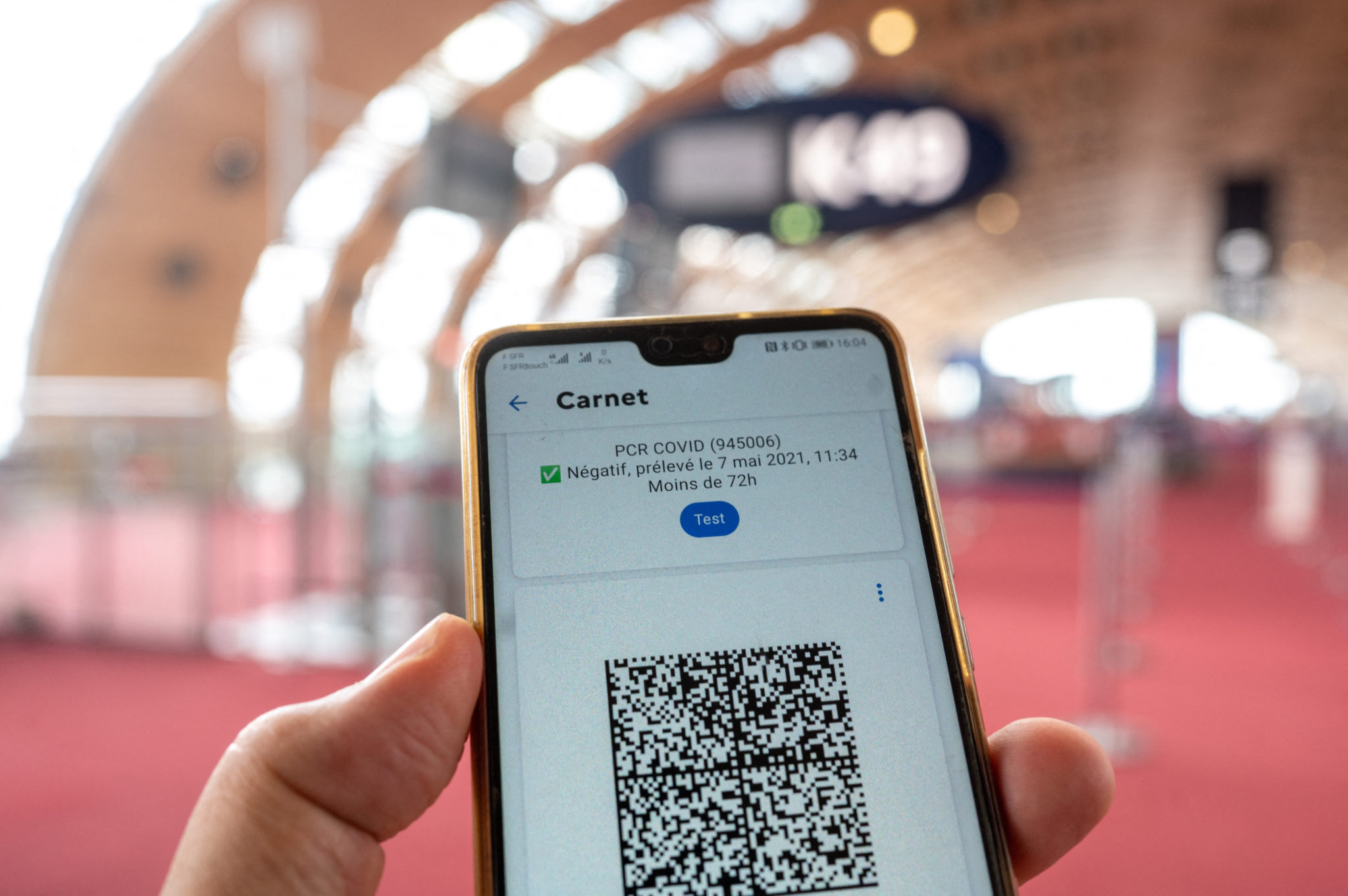 A QR code presenting a vaccination certificate, as well as recent PCR test results, is shown on a smartphone at Charles de Gaulle Airport in Paris, France. Picture by: Balkis Press/ABACA/ABACA/PA Images

He added that the "Rubik's Cube" of regulations across the 27 EU Member States will need to be amalgamated from July 1st when the Green Cert comes into effect.

"What Europe is trying to do is to probably pull them all together," Mr Corry said.

"What we'll probably end up with is, given the way we tangle ourselves up in knots about this international travel debate, is that the only people who will travel unrestricted will be the ones through their second course of vaccine.

"That's not a high proportion, that's around 11% across Europe and 23% have been through the first course.

"If you also have evidence that you had COVID, that will probably allow you unrestricted, but that leaves all that bit in the middle.

He said that "we're all going to be like kids again" getting on planes following 15 months without travel.

Since Friday's announcement, he has seen that people are extremely cautious about planning trips for the last two weeks of July, rather it's August, September and October that are being booked.

Additionally, he has observed a "colossal number of bookings" for 2022.