Mr Corbyn says he has a confidential British government report showing there will be checks between Northern Ireland and Britain.

Northern Ireland will be symbolically separated from the rest of the UK, Mr Corbyn says.

He says Mr Johnson is deliberately misleading the people on Northern Ireland.

He says his party has caught Mr Johnson "red-handed" misrepresenting his own Brexit deal.

He claims the document says goods from from Britain to Northern Ireland will have 'potentially damaging tariffs'.

Speaking at a party election event in London on Friday, he says: "What we have here is a confidential report from Johnson's own government marked 'Official Sensitive' that exposes the falsehoods that Boris Johnson has been putting forward.

"This is cold, hard evidence that categorically shows the impact a damaging Brexit deal would have on large parts of our country.

"Fifteen pages that paint a damaging picture of Johnson's deal on the issue of Northern Ireland, in particular".

Mr Corbyn adds: "We caught the Tories red-handed selling out out NHS in the Trump trade talks, and now we've caught Johnson red-handed - misrepresenting his own Brexit deal".

Turing to page five of the report, Mr Corbyn says: "There will be customs declarations and security checks between Northern Ireland and Great Britain.

"It's there, in black and white. 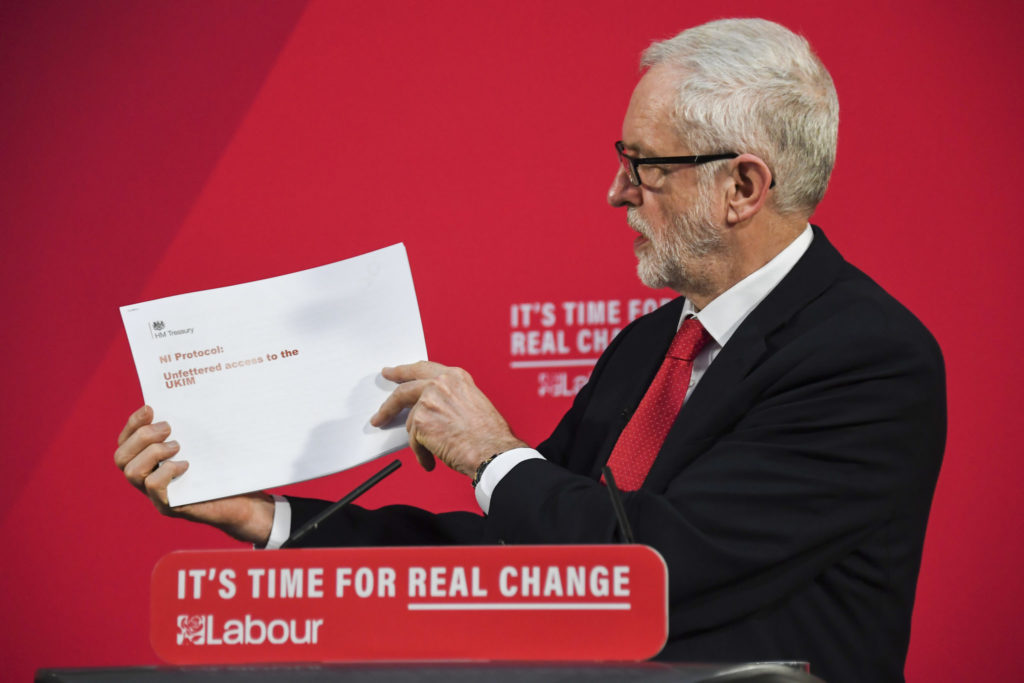 He also claims trade going from Britain to Northern Ireland would see "all of the above, plus potentially damaging tariffs".

Labour's Brexit spokesman, Keir Starmer, then tweeted out pages of the government document.

He says: "Johnson has repeatedly said that his deal would mean there are no customs checks between NI and GB, that the UK is kept together as we exit the EU and that it would be good for jobs."

Boris Johnson has been caught out lying (again) about the damaging impact of his Brexit deal.

Johnson has repeatedly said that his deal would mean there are no customs checks between NI and GB, that the UK is kept together as we exit the EU and that it would be good for jobs. pic.twitter.com/zaOcDvcQ07