The deputy governor of the Central Bank has said more work is required to continue to reduce the ...

The deputy governor of the Central Bank has said more work is required to continue to reduce the risks of Brexit here.

Ed Sibley was speaking at the DCU Brexit Institute on Wednesday.

He also spoke about the work of many people that has delivered a strong level of preparedness for the "significant potential shock" of Brexit.

He said this built on work of last decade of improving the resilience of the financial system.

But he highlighted continued uncertainty as to how the UK will leave the single market.

He welcomed that the risk of the UK departing without a deal had been averted for now.

But he noted that the ultimate outcome was still uncertain.

"While we may be reaching the end of the beginning, a 'hard Brexit' is still sufficiently plausible to require planning."

He added that financial services firms "still have a duty of care to their customers" to take advantage of the extra time available to continue to prepare for the UK's departure.

"In other words, even if ratified, the current proposed deal will have economic impacts and affect the provision of financial services across the EU".

"As the UK leaves, it is increasingly important that Ireland continues to invest in and enhance its approach to influencing the future direction of EU policy." 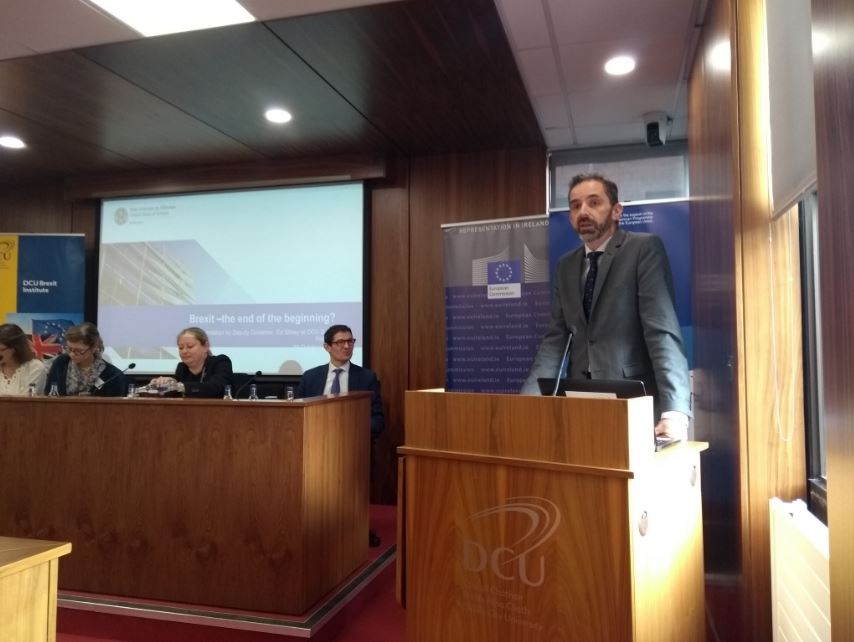 The Central Bank has previously said that a disorderly Brexit scenario would have "a chilling effect" on investment plans, and be associated with a decline in a broad range of asset prices.

"Whatever form of Brexit materialises, the economic impact on Ireland will be negative and material", it says.

"Uncertainty remains regarding the extent of the impact, which will depend on the timing and nature of the changes to trading arrangements as well as the capacity of the economy to adjust to the new arrangements.

"A 'hard' Brexit - whereby the UK reverts to trading on World Trade Organisation (WTO) rules - would have the most severe negative impact on the Irish economy.

"However, even a more favourable Brexit outcome, with a free-trade deal or customs union type arrangement, would result in a loss of output in the Irish economy and higher unemployment", it adds.

Mr Sibley was speaking at the inaugural Brexit Research and Interchange on Differentiated Governance in Europe (BRIDGE) conference in Dublin City University (DCU).

It brings together scholars from across Europe to share knowledge and ideas on how to address some of the toughest challenges facing the continent.

It is coordinated by the Brexit Institute at DCU, and a consortium which includes the University of Copenhagen (Denmark), Central European University (Hungary) and the Free University of Bozen-Bolzano (Italy).