Thrombosis Ireland has won a Global Advocacy Award as part of the World Thrombosis Day campaign. ...

Thrombosis Ireland has won a Global Advocacy Award as part of the World Thrombosis Day campaign.

The award was announced by the International Society on Thrombosis and Haemostasis ahead of the annual event on October 13th.

Thrombosis Ireland, a patient advocacy organisation based in Dublin, was selected for the inaugural World Thrombosis Day Activity of the Year Award for its “Stop the Clot Roadshow.”

The award recognises an organisation that has shown outstanding effort in developing an engaging and
successful activity to raise awareness about thrombosis.

Founder and CEO of Thrombosis Ireland Ann Marie O’Neill said: "We are absolutely delighted to receive this prestigious international award from World Thrombosis Day for International Event of the Year 2020.

"I believe we were up against stiff competition from over 120 countries and Thrombosis Ireland won.

"It is the best news for all of us at Thrombosis Ireland and good news is very welcome at the moment.''

The roadshow, which was organised in 2019, featured a double-decker bus wrapped with information and
resources about thrombosis.

In recognition of World Thrombosis Day, it included stops at 11 hospitals in the Ireland East Hospital Group and their communities for educational presentations, exercise demonstrations and conversations with experts in the field about how to prevent hospital-associated thrombosis.

Ms O’Neill, who is also a blood clot survivor, added: “The Stop the Clot Roadshow reached more than 2 million people in communities and hospitals across Ireland.

“What started out as just an idea, turned into an incredibly successful awareness campaign across the country for World Thrombosis Day.

"It was such a unique opportunity to spread the word about thrombosis in a fun and creative way.”

Launched in 2014 and held annually on 13 October, World Thrombosis Day aims to increase public, healthcare professional and health care systems’ awareness of thrombosis and, ultimately, to reduce deaths and disabilities from thromboembolic disease through a greater awareness of its causes, risk factors, signs and symptoms, and evidence-based prevention and treatment. 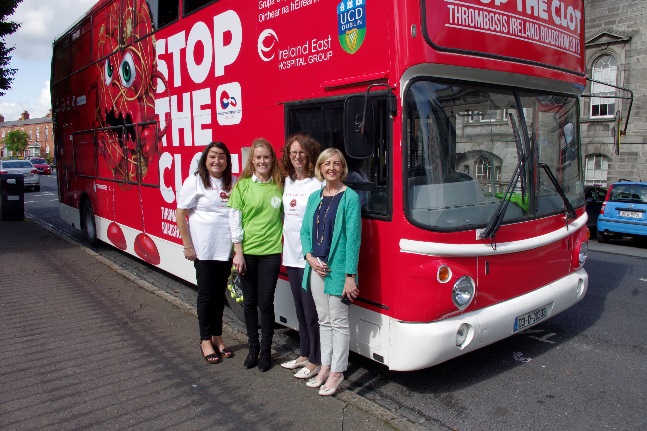