Two in five buyers of homes in Ireland don't need a mortgage to cover the cost. That is according...

Two in five buyers of homes in Ireland don't need a mortgage to cover the cost.

That is according to Pat Davitt, CEO of the Institute of Professional Auctioneers and Valuers (IPAV), who commented on new CSO statistics.

The rate of house price inflation is still growing slowly, but that hasn't seemed to deter a large portion of Ireland's buyers who can afford a place without borrowing a large sum.

IPAV is calling for mortgage terms to be increased to up to 40 or even 50 years to address the difficulties of securing home ownership for those who need to borrow.

Mr Davitt joined The Anton Savage Show to discuss what 2023 has in store for those wishing to buy or sell a property.

Mr Davitt says price increases are going to continue "in some form" for the first half of 2023.

Despite this, he says, there is still a "huge appetite" for buying property.

"Still over 40% of people buying a property don't need a mortgage to buy a property", he explained.

He says this large chunk of cash can come from selling other properties, selling shares or just having "money sitting in the bank and not getting any interest for it".

"There is lots of money in the Irish economy to buy property at the moment", he said.

"From one-off buyers, from people with mortgages obviously as well, because people are earning money they can borrow more money, there is lots and lots of purchasers out there."

"It's very difficult for first-time buyers to compete with it if somebody wants to buy a property that has the money to buy it and they're trying to get a mortgage to buy it", Mr Davitt explained.

The market for mortgage and first-time buyers is made "exceptionally difficult", he says, because in Ireland it is legal to take a higher offer from a buyer even after agreeing to sell to someone else.

Those searching for a home to buy overtime will find that any mortgage they've secured or deposit they've saved will go down in value every month.

However, Mr Davitt says it could be worse as interest rates are "not hugely high at the moment". 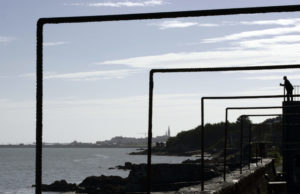 Blackrock was the most expensive place to buy. Photo: Mark Stedman/Photocall Ireland

According to the CSO Residential Property Price Index for the 12 months before November 2022, Dublin house prices increased by 7.1% and apartment prices were up by 6.4%.

The highest house price growth in Dublin was in South Dublin at 11%, while Dublin City saw a rise of 5.1%.

Outside Dublin, house prices were up by 10.2% and apartment prices rose by 4.7%.

The region outside of Dublin that saw the largest rise in house prices was the West (Galway, Mayo, Roscommon) at 15.6%, while at the other end of the scale, the South-West (Cork, Kerry) saw an 8.1% rise.

The lowest median price paid for a dwelling was €150,000 in Longford, while the highest was €620,000 in Dún Laoghaire-Rathdown.