An ambulance took at least an hour to arrive to a life-threatening emergency calls over 260 times...

An ambulance took at least an hour to arrive to a life-threatening emergency calls over 260 times in the first three months of this year.

More than 30 were due to the patients being suspected COVID-19 cases.

The details have been released to Newstalk under the Freedom of Information Act.

Between January and March, the National Ambulance Service got 21,510 life-threatening emergency calls.

On 263 occasions, it took more than one hour for an ambulance to arrive at the scene – with 62 of the calls being in Cork.

32 of the delays were down to the patient being a suspected COVID-19 case, meaning paramedics had to take precautions such as wearing personal protective equipment.

Of all the life-threatening emergency calls, eight had response times of over two hours – in Kildare, Cork, Monaghan, Wicklow, Waterford and Dublin.

The longest was two hours and 53 minutes to an incident in Cork. 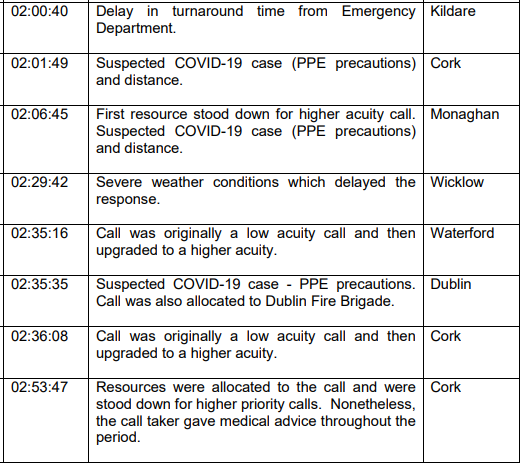 He explained: "We had a fractured hip last year, and it took two and a half hours to get the ambulance.

"We would never get an ambulance is less than an hour - possibly occasionally you will, but most of the time it's an hour and a half.

"They could from anywhere: they can come from Letterkenny, Longford, Roscommon... there's no back up at all."

The National Ambulance Service says the calls of over an hour represent only 1% of life-threatening emergencies during the three-month period.