In Art/Rage, Producer Patricia Baker takes a walk through the streets of Dublin with artist and a...

In Art/Rage, Producer Patricia Baker takes a walk through the streets of Dublin with artist and activist Will St. Leger to explore the evolution of street art in Ireland.

The radio premiere of ‘Art/Rage’ airs on Newstalk 106-108fm on Monday 13th April at 11am, with a repeat broadcast airing on Saturday 18th April at 9pm. Podcast goes live after first broadcast.

The latest radio documentary to be broadcast by Newstalk 106 – 108fm as part of it’s weekly Documentary On Newstalk series is Art/Rage, at look how street art has transformed our streets into a revolving gallery of colour and images. Created as an audio journey through the streets of Dublin with artist and activist Will St. Leger, documentary maker Patricia Baker explores the evolution of street art in Ireland. The programme argues that our cities have become canvases that can testify to the changes in society’s norms, and acts as a revolving creative space for political and social commentary.

St. Leger says that street art enriches the city. “I believe if you go to a city, and take one hour out, not to look at the landmarks but to look at the marks on the wall, you will get a sense of the cultural temperature of the city” 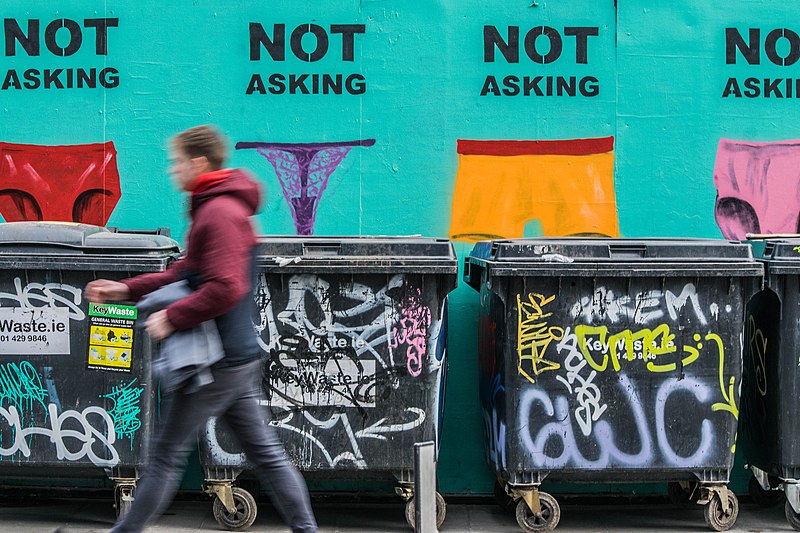 In Art/Rage. Baker interviews a range of established street artists, from Ireland and abroad, as well as Dublin City Council Arts Office to examine the tension that street art often brings when a wall has been painted without permission, and what procedures are being put in place to ease those tensions. She speaks to a representative of street art collective Subset about their Grey Area project and examines the relationship between graffiti and street art.

Artist Al Maser: “I started graffiti maybe at 14…. It did a lot for me graffiti, it was a whole subculture, we are using words like street art, that word was not around when we started, it was graffiti.  There are two different worlds.   Graffiti is coming from writing your name, abstract typography, screwing letterforms and manipulating them, and that is how you express yourself and it develops on to bigger productions and murals.  Street art is coming from originally a more political place were you a communicating a message.  They have all merged into one now.  People with different disciplines are coming into working in the public space a lot more.”

In her exploration of the street art in Dublin, Baker highlights what’s hidden in plain sight, an “Easter egg hunt for the observant” as St. Leger puts it.  We might not have noticed James Earley’s mammoth mural enveloping Blooms Hotel in Temple Bar or the small pieces of glazed tiles etched with private messages in Crampton Court Temple Bar, but the art is there, transforming the cityscape in to a revolving gallery. As Street Artist Kinmx said “it is lovely to find these gifts, when you are walking through the street….”

CREDITS: Art / Rage   is a Curious Broadcast production funded by the Broadcasting Authority of Ireland with the Television License Fee. It was narrated and produced by Patricia Baker, with edit and final mix by Gerry Horan at Contact Studio.  Original Music Score by Gerry Horan.

BROADCAST: The radio premiere of ‘Art/Rage’ airs on Newstalk 106-108fm on Monday 13th April at 11am, with a repeat broadcast airing on Saturday 18th April at 9pm. Podcast goes live after first broadcast.

PODCAST: Art/Rage is broadcast as part of the Documentary and Drama On Newstalk Series, which showcases the best of original, homegrown and groundbreaking Irish Radio features. Podcast full series here:

Sound And Vision Funding Scheme: Sound and Vision is a funding scheme for television and radio that provides funding in support of high quality programmes on Irish culture, heritage and experience, and programmes to improve adult literacy. The scheme is managed by the Broadcasting Authority of Ireland.

Documentary On Newstalk: Do Disturb